Oil spill Firefox plugin blacks out BP across the Web 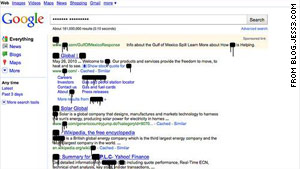 (Mashable) -- Creative agency Jess3 has developed a Firefox plugin that aims to black out all mentions of BP (British Petroleum) across the web. As one popular tweet espouses, "Want BP to [blank] up your browser like they've [blank] up the Gulf? Install the Oil Spill Firefox plugin from @jess3."

Similar to the Shaved Bieber plugin that made the rounds last week -- scrubbing all mentions of everyone's favorite YouTube star off the Web -- the Black Oil Firefox plugin replaces all mentions (case insensitive) of BP and accompanying terms like BP oil, BP gas, BP worldwide, and so on, with blacked out letters and dripping oil drops.

Images that contain meta data matching the terms are also blacked out (or blued out, as was the case on my machine).

You can see what the plugin looks like when doing a Google search for "BP."

In a future version of the plugin, Jess3 plans to add oil drip effects to BP photographs and to turn official BP websites black and white.

As the disastrous oil spill in the Gulf of Mexico continues to wreak havoc on the environment and residents along the gulf shore, this plugin may not do much to stop the oil, but it's a nice way to express anger and outrage over BP's response (or lackthereof).

What do you think of the plugin?