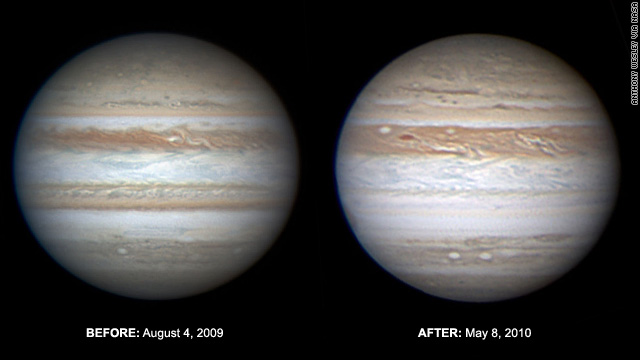 (CNN) -- Scientists don't know why, but one of Jupiter's two main cloud belts has disappeared -- again.

Like a wayward pet, the belt has gone missing before and has always returned.

"This is a big event," said planetary scientist Glenn Orton of NASA's Jet Propulsion Lab. "We're monitoring the situation closely and do not yet fully understand what's going on."

The brown cloudy band, known as the South Equatorial Belt, or SEB, started fading late last year, NASA said in a story on its website.

Orton says the belt may not be gone, just hidden under higher clouds.

"It's possible," he said on the NASA website, "that some 'ammonia cirrus' has formed on top of the SEB, hiding the SEB from view."

On Earth, NASA says, white wispy cirrus clouds are made of ice crystals. On Jupiter, the same sort of clouds can form, but the crystals are made of ammonia instead of water.

The belt's disappearances can be erratic.

The return of the SEB can be dramatic, NASA said.

"We can look forward to a spectacular outburst of storms and vortices when the 'SEB revival' begins," Rogers told NASA. "It always begins at a single point, and a disturbance spreads out rapidly around the planet from there, often becoming spectacular even for amateurs eyeballing the planet through medium-sized telescopes.

"However," he said, "we can't predict when or where it will start. On historical precedent, it could be any time in the next two years."

"I'll be watching every chance I get," Wesley said. "The revival will likely be sudden and dramatic, with planet-circling groups of storms appearing over the space of just a week or so."

Jupiter, the largest planet in the solar system, is visible in the eastern sky before dawn, NASA said.