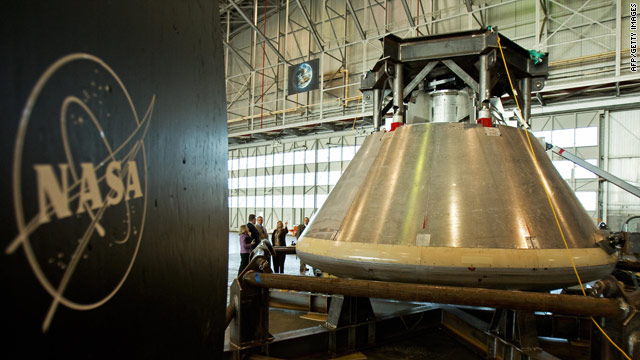 (CNN) -- American astronauts will not return to the moon as planned if Congress passes President Obama's proposed budget.

Obama's budget -- which aims to tighten the nation's purse strings in certain areas while increasing money used to create jobs -- would cancel NASA's Constellation Program, which had sought to send astronauts back to the moon by 2020.

Constellation also intended to study the idea of establishing a moon colony. The program was set to follow the U.S. space agency's shuttle missions, which are due to end in September.

On its Web site, the White House Budget Office says the program to send astronauts to the moon is behind schedule, over budget and overall less important than other space investments.

"Using a broad range of criteria, an independent review panel determined that even if fully funded, NASA's program to repeat many of the achievements of the Apollo era, 50 years later, was the least attractive approach to space exploration as compared to potential alternatives," the site says.

"Furthermore, NASA's attempts to pursue its moon goals, while inadequate to that task, had drawn funding away from other NASA programs, including robotic space exploration, science, and Earth observations."

Overall, Obama's proposed budget increases the National Aeronautics and Space Administration's budget by $6 billion over the next five years. The president's budget would give NASA a $19 billion budget in 2011, compared to its $18.3 billion budget this year.

Congress has to approve the federal budget, and a final ruling may not happen for months.

The budget changes will not prevent NASA from returning astronauts to the moon and exploring the rest of the solar system, NASA Administrator Charlie Bolden said in a conference call with reporters on Monday.

"Imagine trips to Mars that take weeks instead of nearly a year; people fanning out across the inner solar system, exploring the Moon, asteroids and Mars nearly simultaneously in a steady stream of firsts ... That is what the president's plan for NASA will enable, once we develop the new capabilities to make it a reality," Bolden said.

The NASA administrator emphasized the fact that the president's budget would increase NASA funding overall and said the Constellation program was behind schedule and over-budget anyway.

"The truth is we were not on a sustainable path to get back to the moon's surface, and as we focused most of our efforts and funding on getting back to the moon we were neglecting investment in key technologies to get us beyond," he said.

Sen. Bill Nelson, a Democrat from Florida, criticized the president for slashing NASA's moon-mission program from his suggested budget.

The move could cause the U.S. to fall behind other countries in space exploration, he said.

"If they don't push hard now for research and development of the new big rocket that'll take us out of low-Earth orbit and let us explore the heavens, then we are going to be falling behind China and Russia, and that's something I don't think will sit well with the American people," he said in an interview with CNN.

Louis Friedman, executive director of The Planetary Society, called that assertion "ridiculous," and said he's hopeful the end of Constellation would lead to the U.S. returning to the moon more quickly.

Friedman believes that Constellation is a flawed and bloated program, which should be replaced with a new program that would get the U.S. back to the moon more efficiently.

Constellation was behind schedule, and a new program offers a fresh start and puts needed emphasis on space exploration beyond the moon, he said.

"I think the Constellation program probably fell on its own weight as opposed to any major policy change," he said.

Others questioned what will happen to the money NASA has already spent on its program to return to the moon.

"I think that some of the things they're working on could be used regardless of what the program is," said John Pike, director of GlobalSecurity.org and a space policy expert. "Some of it however, I think is just going to end up on the cutting room floor."

NASA says the Constellation research and technology would be useful in other space endeavors.

CNN's John Couwels and John Zarrella contributed to this report.