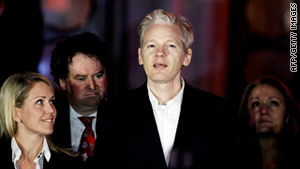 Last week's appearance by Julian Assange raised questions about the use of Twitter in English courtrooms.
STORY HIGHLIGHTS
RELATED TOPICS

(CNN) -- In a nod to the digital age, a British judge ruled Monday that reporters may send messages to microblogging site Twitter from courts in England and Wales.

"The use of an unobtrusive, hand-held, virtually silent piece of modern equipment for the purposes of simultaneous reporting of proceedings to the outside world as they unfold in court is generally unlikely to interfere with the proper administration of justice," Lord Chief Justice Igor Judge said in a decision published online.

Judge said media personnel may seek permission to use Twitter in the courtroom on a case-by-case basis.

"When considering, either on its own motion, or following a formal application or informal request, whether to permit live text-based communications, and if so by whom, the paramount question will be whether the application may interfere with the proper administration of Justice," the justice wrote.

Cameras and recording equipment remain banned in courtrooms, leaving Twitter as the only source of live coverage during court proceedings in England and Wales.

"The most obvious purpose of permitting the use of live, text-based communications would be to enable the media to produce fair and accurate reports of the proceedings," Lord Chief Justice said.

On December 14 during Assange's bail hearing, The Times' correspondent Alexi Mostrous tweeted, "judge just gave me explicit permission to tweet proceedings "if it's quiet and doesn't disturb anything". #wikileaks"

Two days later, a judge banned the use of Twitter in the courtroom. Guardian reporter Esther Addley stepped out of the court to live blog the judge's rulings.

"I recognize the calls for debate ... the issue involving Twitter may involve the potential for disruption to the atmosphere of the court, which one might call its dignity," Addley quoted the judge as saying.