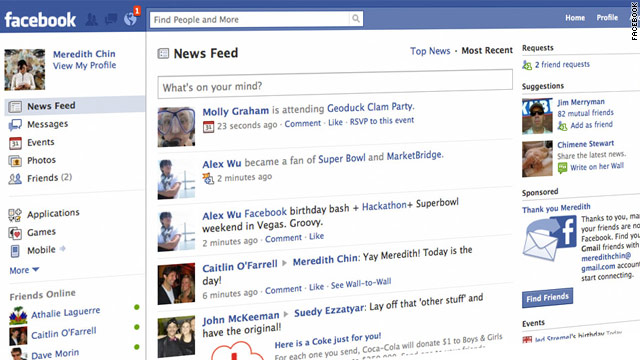 Roughly 45 minutes after the mistaken update, Facebook disabled the site and reverted back to its previous state.
STORY HIGHLIGHTS
RELATED TOPICS

(Mashable) -- Facebook accidentally went live with a handful of prototype features earlier today, including a site-wide yet short-lived overhaul of Pages.

Roughly 45 minutes after the mistaken update, Facebook disabled the site, reverted back to its previous state and then tweeted apologetically about the downtime. But that brief span of time was enough for Facebook members and Page admins to get a sneak peak at new features in the works.

Facebook admitted to pushing features before their time. "Also, some internal prototypes were exposed to people and resulted in us disabling the site briefly. It's now back to normal," read a tweet from Facebook.

So what were those prototypes exactly? Screenshots shared with us and surfaced through other media outlets suggest all of the following: new Facebook Pages (with Questions integration), a "Switch Accounts" feature for Page Admins, a new Memories feature that chronicles photos and status updates from years past and an "Outside World" filter for the News Feed.

What follows is a deeper look at what some Facebook users saw today.

Pages got a temporary facelift with a tab-free design -- the navigation instead being placed on the left-hand side of the Page -- that more closely resembles Facebook Place Pages and member Profiles. We also noticed that Questions were integrated into the Pages experience and that Facebook introduced a "Switch Accounts" feature for Page admins.

We initially thought it strange that new Facebook Pages would be released without an announcement from Facebook. Commenters agreed; many of you expressed displeasure at the idea that would Facebook would overhaul Pages without notifying you of the changes first.

When pressed for clarification specifically around Pages, a Facebook spokesperson shared the following statement: "While we are always experimenting with new features internally we are not making changes to Pages right now. Organizations invest a lot of time on their Facebook Pages because millions of people find them useful everyday. We remain committed to providing ways for Page owners to customize and control the experience on their Page. If we do make changes, we will provide partners with advance notice."

Several users reported having access to a new "Memories" option listed below Photos in the left-hand menu on their Profile Pages.

A "Mashable" commenter said of the feature, "I was online during the glitch and also saw a new MEMORIES link under my profile pic. It's gone now but I did get a sneak peek while it lasted. It allowed you to look back at status updates, photos, and new friends...giving a snapshot of each year I've been on FB."

The "Next Web" reporter Courtney Boyd Myers saw the Memories option and described it in a similar fashion. "It showed options for jumping to photos grouped by years: 2010, 2009, 2008, etc. with complementing information like status dated status updates, the number of friends added per year, events attended and Facebook places check-ins," she wrote.

Memories would make for a pleasant (hopefully) walk down memory lane, so we hope this features finds its way back to Profile Pages in the near future.

We also found some evidence that Facebook may still be testing a filter for the News Feed called "Outside World." Twitter user @casschin posted a TwitPic of the filter that shows the News Feed with a Most Recent drop-down menu that includes "Outside World" as a filter.

"FBHive" first unearthed the filter back in 2009 and speculated that it was an RSS-like option for the News Feed. At the time, "TechCrunch" confirmed with Facebook that the filter was for internal staffers only. We're not quite sure to make of this one just yet.

Several commenters have said they also saw the lightbox UI for Facebook Photos, albeit with a few bugs. The photo included here comes courtesy of "Mashable" reader Andrew Mrozkowski.

The feature was first previewed when Facebook upgraded Photos two months ago. "Any time you click on an image anywhere on Facebook, be it in an album or in your News Feed or on a friend's Wall, you'll see a black box hovering over the rest of the screen with some minimal navigation controls and relevant social features, allowing you to concentrate completely on the image at hand," said "Mashable" reporter Jolie O'Dell at the time.

Facebook may have pushed a premature update to comment boxes earlier today, according to Mashable readers. Readers are reporting that comment boxes temporarily mirrored those in the new Facebook Groups product and did not have the "Comment" button. Without the button, a user simply needs to hit the Enter/Return key to submit his comment.

The screenshot above is merely a mock up, but these reports sound about right. Facebook consistently updates older products to match the style of its newer ones.

Hat tip to Long Nguyen, Dep and the rest of our astute readers on this find.

Were you privy to these or other changes? Share your thoughts in the comments.