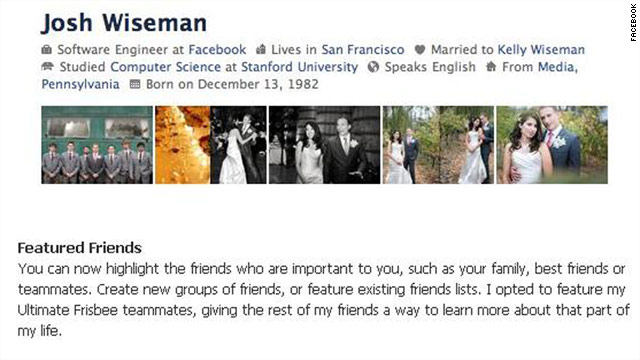 (CNN) -- An update to Facebook profiles that was rolled out Sunday puts an emphasis on personal details: letting users introduce, or re-introduce, themselves to fellow users more quickly.

The new profile page, which many of Facebook's 500 million or so users were shifting toward Monday morning, is topped with recent photos and lists relationship, hometown and work status, among other details, right up front.

"You can see all the things that you have in common with that person," Facebook CEO Mark Zuckerberg told "60 Minutes" interviewer Lesley Stahl Sunday night. "It gives you this amazing connection with that person in a way that the current version of the profile that we have today just doesn't do."

OK, but how, exactly? Some users may be confused about how these profile changes work and when they will take effect. So we'll try to answer your questions:

What's different about the new profiles?

Current Facebook profiles list personal information such as birthday, relationship status and city of residence in a left-rail column underneath the user's single profile photo. The new design moves that information up higher, in a more conversational format -- offering a quicker, more readable mini-portrait of a person.

In Sunday's interview, Zuckerberg called the change an effort to put the most important details about a user front-and-center for new friends or friends looking to catch up.

"I work at Facebook, and I spend all of my time there, right?" he said. "I mean, here are my friends. I grew up in New York, and now I live in California, right. Those really kind of basic, important things."

In addition to your one profile photo, the default version of the new page displays five other recent photos that you've been tagged in.

Another new feature shows a history of your relationship with any of your Facebook friends. It displays such details as comments you've exchanged and places you've visited together.

Does my profile page have to change?

The new profile page will be rolled out over the next month or so, according to a blog post from Facebook. If you do nothing, you'll log on to your profile page one day soon to find that Facebook has rearranged your information to fit the new layout.

But users who want to update now can do so by following a prompt from their profile pages.

How will this impact the information I choose to share on my page?

The change does not affect users' pre-existing privacy settings. A quick attempt to web-search for a user's Facebook page (which had been updated) on Monday revealed the same information that was public before the switch.

And if you don't like the five photos of you that appear near the top of your page, you can hide them or swap them out for different ones.

How do I update my profile?

• Your new profile page will appear. At the top, you can update personal information about things like your job, current city and relationship status.

• You can click the "Edit Profile" link to change any other information.

• If you don't like the photos that appear, hover your cursor over them one at a time. A box will appear at the top right that you can click to remove that photo. This will not make the photo disappear entirely or remove your tag; it will just mean it won't be one of the ones people see at the top of your profile.

How are Facebook users reacting to the new profile pages?

Perhaps predictably, the change didn't come without criticism. Because of its massive user base, Facebook can't make any tweaks to its site without some grumbling.

"The new layout might have good potential, but the old layout was much more organised," one user wrote on the site's blog. "Facebook's simplicity is what made it so different from other social networking sites, please don't go trying to be like MySpace, which has lost enough users already."

Another wrote: "The long list of friends on the left side looks awful. I wish there was a way to lump them together just using their pictures - like how "chat" is now on the main page. Also, the info page is way too long for everybody and seems too cluttered. I don't really feel like there's any real organization to it."

Other commenters were more enthusiastic.

"For once I like the changes they are making, particularly being able to see your FB history (chats, events) with your friends, seeing all the "likes" you have in common, and viewing past messages with them at a glance," a user wrote. "I've always thought the current profile page was dumb, considering the info they have."

Much of the response in the tech blogosphere Monday was positive.

"I've haven't had much time to play with the new profile, but my initial impression is favorable," wrote Jason Kincaid for the blog TechCrunch. "Yes, I'm sure there will be plenty of griping from people who don't like the 'vital stats' area (which you can't rearrange), and those vain users among us (myself included, obviously) now have to spend time making sure they look good in the five images in their photo streams.

"But once everyone gets over their aversion to change, I think they'll come to like the new profile pages just fine."

Larry Dignan, of ZDNet's Between the Lines blog, wrote that the change could give Facebook an edge over LinkedIn, a networking site geared to professionals.

"Facebook will at least allow you the option to use it more as an online resume. Funny that's exactly how LinkedIn is used," he wrote. "If you can list your jobs, key projects and work connections on Facebook does that minimize the importance of LinkedIn? There's no ready answer to that query, but you have to wonder."