The perils of digital snooping 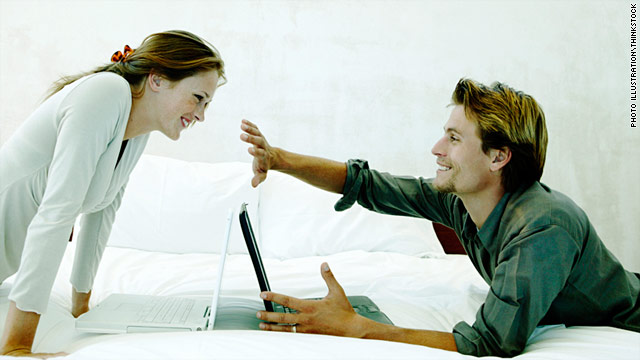 (CNN) -- As anyone passing through a U.S. airport discovered last week, privacy is a precious thing.

And while we can't expect it from grope-happy TSA officers, everyone should be able to demand a certain level from family and friends. So let's start with this week's most obvious shining bauble of a takeaway point: Don't snoop.

A few decades ago, snooping had pretty clear-cut definitions: jimmying open the lock on Sally's diary and reading about her awkward fumblings with Billy, listening behind a closed door with a tumbler pressed against the wood, or slicing open a neighbor's mail. (We soon learned this last one is illegal, meaning that 10-year-olds still freeze in abject fear whenever they realize they've accidentally ripped open their sister's card and brace themselves for policemen to swing in through the windows, handcuffs at the ready.)

Nowadays, accidental espionage is the norm. You grab your girlfriend's phone to check the time -- and bam, there's a text from her ex-boyfriend. You crack open your daughter's laptop to show her a Flickr album -- kapow, there's her friends-only Blogspot in fully accessible glory. You surf to Gmail the day after your friend used your computer, and hello, friend's inbox.

And if you do suspect bad behavior, e-investigation is almost too easy. Like it or not, from time to time your eye will fall on something that's not meant for you, and when that happens you're a big fat privacy invader.

So hang on, snoopy. You can minimize the damage both to your own conscience and to your relationship by following our three rules of digital snooping. (They're completely made up, but this is a netiquette column so we get to do that -- deal with it.)

The second you make a move to read the rest of the text or scroll to see more of the illicit e-mail, you've gone from the snooping equivalent of manslaughter to murder. No matter how intensely your curiosity was piqued, no matter how tantalizing the first few words are -- it's a dark road and a slippery slope and all sorts of metaphorical directions you'd best avoid.

Make like an uncomfortable traveler watching a fat man entering the full-body scan and avert your eyes.

2. Figure out why you want to snoop.

Everyone's favorite cat-killer (curiosity, that is) is a powerful force, but for most of us it's not potent enough to compromise our personal moral codes. So if you're just dying to check a certain relation's browsing history or e-mails or texts, there are likely some real-life red flags that are bugging you.

If, pre-snooping, you can't shake the feeling that your beau is still in contact with that ex in Phoenix despite his impassioned assertions that she's out of the picture, or your motherly spider sense is tingling with suspicion that little Suzie is addicted to her classmate's Adderall, your best bet isn't to grab a magnifying glass (or hit ctrl-F) and go all Encyclopedia Brown, it's to man up and ask him or her about it. (Without any mention of his or your digital habits, of course).

Here's the cool part: If you're a trusting person (read: not maniacally exploring his or her smartphone in the dead of night), that doesn't mean you're gullible. In fact, a study from the University of Toronto suggests you'll actually be better at judging whether he's telling the truth when you ask him point blank what's up.

3. Know when to call yourself out.

What's making you feel all squirmy? Are you bothered by the fact that you saw something that wasn't meant for you, or by the content of what you saw? If it's the former, hats off to you for having a superhuman guilt reflex; there's no reason to tell your friend you saw that embarrassing follow-up e-mail from her gynecologist, so get over it, even if 'fessing up would make you feel better.

(Exception: If she never, ever remembers to, say, log out of Facebook when she's done perusing at your place, the dingbat could probably benefit from a lesson in Protecting Your Personal Info 101.)

But what if your accidental indiscretion really is weighing on you? You truly didn't mean to glimpse a text from her ex, and now it's bugging you, or he doesn't know that you know that that flirtatious co-worker of his is sending him Facebook messages. So you walk around with narrowed eyes, thinking, "Gah, you're keeping a secret from me. Why don't you just tell me?!"

Well, here's the missing piece, folks, the oft-overlooked sucker-punch from reality: You're keeping a secret now, too -- the fact that you read a private missive.

So take a deep breath, and reveal exactly what you were doing (grabbing her phone to find Tommy's number, as requested), exactly what you saw (Was that a MySpace shot of a dude with his shirt off?!), and exactly how it's making you feel (ashamed that you accidentally snooped; suspicious of this beefcake; inadequate about your own pecs; slightly turned on).

Then you'll be back on the road to Trusting Relationship Town, population: you and your circle of not-hating-you friends.

Or at least, you'll be on the road to passcodes and phone locks all around. Judging by those gloved, blue-shirted airport employees now pawing through your toiletries, it might be the last bastion of privacy you get.