Touched by the TSA? Win an iPod 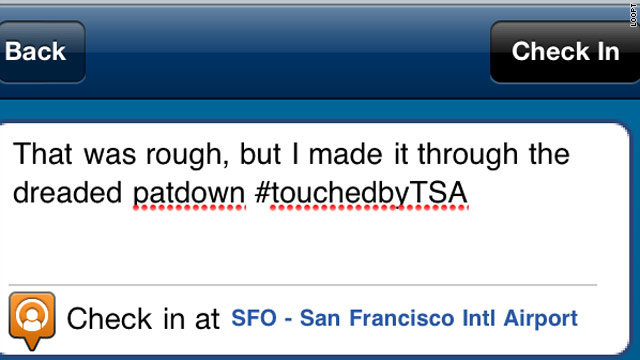 Holiday travelers can check in via Loopt on Wednesday and share with Twitter for a chance to win an iPod Touch.
STORY HIGHLIGHTS

(CNN) -- Mobile-connected holiday travelers worried about being groped during airport security screenings can now at least hold out hope for a "Touch" of a more pleasant nature.

Loopt, a mobile check-in app along the lines of Foursquare and Gowalla, is giving away 10 iPod Touches to users hitting airports Wednesday, the day before Thanksgiving when lines are expected to be even longer than usual due to new measures by the Transportation Security Administration.

To win one of the music and game players, users need to check in using the app, write briefly about their airport experience, then send the message to Twitter using the pithy hashtag, #touchedbyTSA. Loopt will choose 10 winners at random.

There are 400 new full-body scanning machines at 69 airports nationwide, according to the TSA.

Some travelers have complained that the scans, which leave little to the imagination, are an invasion of privacy. Some also wonder whether the X-ray scanners are safe, although the TSA maintains they are.

The alternative to passing through them is what airport visitors have described as a thorough pat-down by a security agent.

Some critics are calling on travelers to declare Wednesday National Opt-Out Day. While organizers declare the intent isn't to slow down traffic, authorities fear that's exactly what would happen if thousands of people demand the search.

"In light of recent controversy, many plan to refuse a backscatter scan at airport security, and instead choose a (fairly invasive) pat-down," Loopt wrote in a post on its blog. "Either way, people can count on longer-than-usual airport lines."

Read what the TSA calls the "myths and facts" about new security measures.

Travelers don't have to have an up-close-and-personal encounter with a TSA agent to win an iPod. In theory, people could go to an airport, check in on Loopt and then leave without going through security -- although some might call that cheating.

The Loopt post doesn't say when the iPod Touches will be awarded -- although they might make a nice treat for folks planning to stock up on techie holiday gifts.