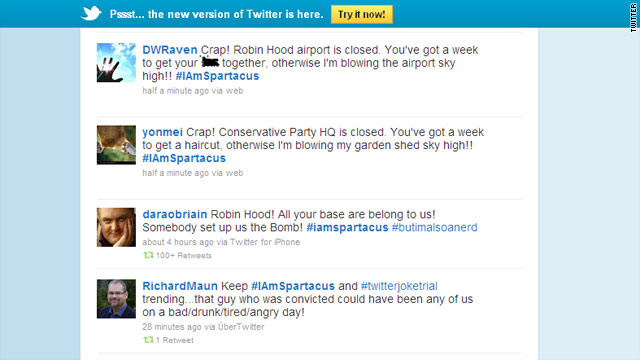 Some of the tweets sent in support of Paul Chambers who lost his appeal against his conviction for sending a "menacing" tweet.
STORY HIGHLIGHTS
RELATED TOPICS

London, England (CNN) -- Thousands of people have been retweeting a message threatening to blow up an airport in support of a British man who lost his appeal on Thursday against his conviction for sending the original tweet.

The online campaign to support Paul Chambers has been one of the most popular subjects or trends on Twitter since his appeal was dismissed in a north England court.

He had originally sent the following tweet in January: "Crap! Robin Hood Airport is closed. You've got a week and a bit to get your s--- together, otherwise I'm blowing the airport sky high."

He had been planning to go to Belfast, Northern Ireland, to meet a woman he had met through Twitter.

The case highlight the arguments for and against the limits of free speech on the internet.

Chambers' supporters include the British actor, comedian and prolific tweeter Stephen Fry, who while not retweeting the original message, has reportedly offered to pay his court fines.

Fry's sentiments are shared by the thousands of tweeters using the #IamSpartacus hashtag, who have been retweeting the original message and variations on its theme.

One tweeter, calling himself DrSamuelJohnson tweeted: "Ordure! Robin Hood's Port is clos'd! Seven Days hence I shall run you through with a PIKESTAFF!"

Chambers, 27, was found guilty in May of sending a "menacing" electronic communication. Following his conviction he was ordered to pay a £385 ($621) fine and £15 ($24) victim surcharge.

On Thursday Chambers was also ordered to pay the prosecution costs of £2,600 ($4193), according to the Press Association.

Chamber's legal defense said the final ground of appeal was that Twitter was not a "public electronic communications network" within the meaning of the relevant law, PA reported.

However, the judge in the case dismissed Chambers' appeal on every count.

The court heard that the Tweet was discovered when an airport manager, who was not a Twitter member, searched for "Robin Hood Airport" on the Twitter site.

On Friday Chambers sent the following tweet: "Just to let you know, I've been instructed not to talk too much about case at the minute while we look at appeal."

A statement released by South Yorkshire Police said: "The matter has run its course in the courts. The defendant was found guilty of a relatively low level Communications Act offence in the local magistrates court, a decision upheld by the crown court."