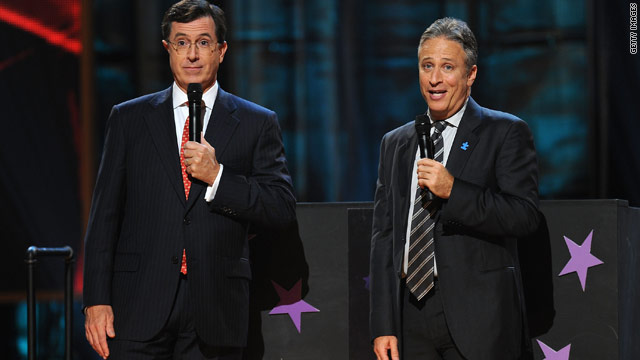 While young voters may not flock to the polls, many use Stephen Colbert and Jon Stewart as their primary news sources.
STORY HIGHLIGHTS
RELATED TOPICS

Editor's note: Gregory Ferenstein is an author and educator who writes about the intersections of technology, business and politics. He is a fellow at the University of California Center for the Study of Democracy.

(CNN) -- If Barack Obama's juggernaut of a presidential campaign could only boost youth turnout by 2 percent, it is silly to think Jon Stewart's and Stephen Colbert's rallies Saturday in Washington will have any sort of tectonic political force.

Even so, conservatives such as Glenn Beck are warning listeners that the Colbert-Stewart rally is an attempt to "activate the youth." Beck may have bought into the widespread myth that 2008 was the "year of the youth vote" -- an appealing media sound bite that ultimately wasn't reflected much by the data.

At first glance, the two Comedy Central comedian-hosts seem well positioned to sway voters. Colbert's audience smashed a goal of raising $100,000 for DonorsChoose.org in roughly a single day. Political scientist James Fowler estimates that a Democratic candidate's appearance on "The Colbert Report" results in a whopping 44 percent increase in donations (Republicans get a much smaller bump).

As a result, a who's who of global politics, including Barack Obama, have appeared on the late-night shows, giving the impression that this young, late-night audience is an essential demographic to pay homage to.

Colbert's and Stewart's high TV ratings and their 3-million strong Facebook fan base pale in comparison to the online popularity of Obama's 2008 campaign. The centerpiece of the longest horse-race news coverage in American history, Obama had a founder of Facebook personally develop his social networking platform; he coordinated his millions of online followers through one of the most sophisticated and well-funded campaign organizations ever conceived.

Still, nearly all this energy was sucked up by the black hole of youth apathy, which produced a meager 2.1 percent increase in turnout. (Actually, these numbers were inflated by a spike in young black turnout, which Stewart and Colbert are unlikely to re-inspire).

The reason for the apparent gap between young online enthusiasm and their voting behavior has to do with the peculiar characteristic of Generation Y: They prefer noninstitutional civic involvement. To them, being a citizen means attending a rally, boycotting a product and donating online -- but not necessarily voting.

According to political scientist Russell Dalton, this stands in sharp distinction from traditionalist notions of citizenship, which include obeying the law, performing jury duty, working with a political party, and, yes, voting. The discrepancy explains that while the young feed online buzz and attend rallies, the bulk of voting is done by their parents.

So, how can the Stewart-Colbert rally convert this latent energy into usable political action?

Colbert has demonstrated an extraordinary ability to raise funds online, but even a belated surge in donations will do little for candidates in elections three days after the two comedians' appearance in Washington.

In the longer term, Colbert and Stewart could highlight institutional reforms, such as open primaries, same-day voter registration and campaign finance reform, that are thought to boost young and moderate voters.

For instance, political primaries weed out moderate candidates by forcing conservatives and liberals to prove their pure ideological credentials before they can represent their party in a general election. Colbert once brought on an advocate of open primaries, California Lt. Gov. Abel Maldonado, and California voters approved the reform a short time later.

Second, to increase voter turnout on November 2, rally attendees should register for Election Day events on every social network imaginable. Colbert and Stewart should encourage attendees to RSVP to the "Election Day" event on Facebook.

Thousands of RSVPs would flood the newsfeed of millions of young Facebook users and stir up implied peer pressure to vote. One university study found that students' perceptions of their peers' voting intentions was a significant predictor of their intentions to vote. It should be no surprise that in a demographic where fashion trends spread like wildfire, so do civic norms.

On Election Day itself, rally attendees should be encouraged to "check into" their polling location using mobile applications such as Foursquare or Gowalla, and have this display on their friends' Facebook newsfeeds. Both geolocation application makers have designed special citizenship badges for Election Day, which will bring the "I Voted" sticker into the virtual realm.

Colbert and Stewart, as a primary news source for young Americans, could bring attention to some much-needed reform and maybe even tilt a few contested congressional seats. If the two satirists use their platforms wisely, they may realize a small but important slice of the political power they are said to hold.