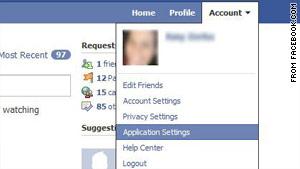 The issue could affect tens of millions of users, according to the report.
STORY HIGHLIGHTS
RELATED TOPICS

(CNET) -- Many of Facebook's most popular apps are sharing personally identifiable information of their users with dozens of advertising and Internet-tracking companies, in violation of the social-networking giant's own rules, according to a Wall Street Journal report.

The issue provides access to users' names and, in some cases, the names of the app user's friends to at least 25 advertising and data firms, the Journal reported.

The issue could affect tens of millions of users, according to the report. The Journal found that the 10 most popular apps, including Zynga's FarmVille, were transmitting user IDs -- which can be used to look up a user's name -- to third-party companies.

Data-gathering firm Rapleaf was able to link information gathered from those apps to its own database of Internet users, the report found.

The San Francisco-based start-up provides a people search engine that lets you retrieve the name, age, and social-network affiliations of anyone, as long as you have his or her e-mail address.

The Journal reported that Rapleaf transmitted some of the information it obtained to third parties but told the newspaper that the transmission was unintentional. Rapleaf did not immediately respond to a request for comment on the issue.

A Facebook representative said in a statement to CNET it was taking steps to "dramatically limit" exposure of users' personal information to companies like Rapleaf.

"Our technical systems have always been complemented by strong policy enforcement, and we will continue to rely on both to keep people in control of their information," a Facebook representative said the statement.

The revelation spotlights the challenge Facebook faces in keeping user data private. In May, for instance, the massive social network grappled with a bug in its "Preview My Profile" feature that allowed some Facebook users' live chat messages and pending friend requests to be briefly visible to their contacts.

Earlier this month, Facebook announced a series of new features designed to give users more control over apps, including revamped groups, a profile downloading tool, and a cleaner way to manage access to third-party applications.

One of those features was a "dashboard" for managing which applications you're connected to and which data permissions have been granted to them.