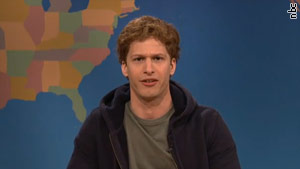 "The Social Network," the most popular movie in the country, is dramatizing his life onscreen, while paparazzi are snapping photos of him outside his Palo Alto, California, home.

Now comes another byproduct of his growing fame: Zuckerberg and Facebook were lampooned over the weekend on "Saturday Night Live."

Andy Samberg, wearing the trademark Zuckerberg uniform -- a hoodie over a T-shirt -- plays the Facebook founder in a "Weekend Update" interview in which he defends himself against questions by host Seth Meyers.

Asked whether he created Facebook just to meet girls, he says, "Of course, I did! Why does anyone do anything? I mean, why did you get on TV?"

When Meyers asks whether his recent $100 million donation to Newark, New Jersey's schools was made to boost his image as an unflattering movie about him was hitting theaters, he responds, "What does it matter? It was $100 million!"

Samberg/Zuckerberg also complains about the movie's casting -- "Sean Parker gets Justin Friggin' Timberlake and I get Jesse Eisenberg?" and says his one regret about Facebook is its "Poke" feature.

"Poking is creepy and lame, and getting an e-mail saying that your dad poked you is an enormous bummer. I know that now."

According to several news reports, the real Zuckerberg was amused by the largely sympathetic sketch, posting a Facebook status update that said, "... I thought this was funny."

Samberg and "SNL" host Jane Lynch also appeared in a fake commercial for a "Damn It, My Mom Is on Facebook Filter" that scans young people's Facebook pages for content their mothers might object to and then changes it to something more wholesome.

In the ad, Samberg types a status update, "There isn't enough beer in the world for me to deal with Glenn Beck's Holy Roller BS" that gets "mom-filtered" to read, "Boy, do I need new dungarees."