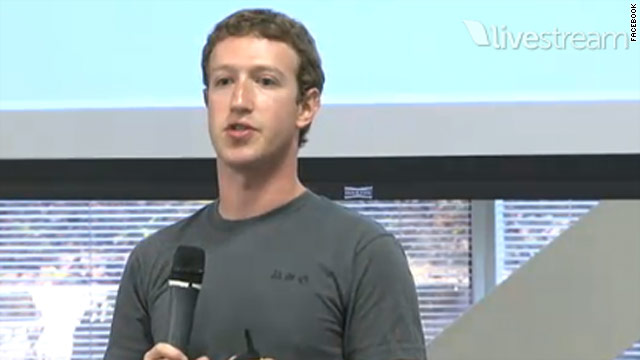 He said the new features would begin rolling out later Wednesday.

"A lot of people talk about this as a privacy problem, but I think even more than that, it's an annoying [others] problem," Zuckerberg said.

A user might say, "I would post this, but do I really want to bug all my friends who don't like jogging how great it is that I had an awesome jog this morning?" he said.

Groups will let Facebook users make groups like family, work friends, friends from school or friends with a specific interest.

They'll be able to share information specifically with members of those groups and even create group chats with those members.

"We think this is really going to change fundamentally how you use Facebook today," said Justin Shaffer, product manager for Groups and former CEO of Hot Potato, a mobile social-media app that Facebook bought this summer.

A list feature on Facebook already lets users create subsets of their friends. But Zuckerberg said that only about 5 percent of Facebook's roughly 500 million users use it.

"We wanted to design something that would be used by more than 5 percent of people ... that is so easy to use that everyone will interact with it," he said.

Current Facebook lists are a solitary exercise. A user can create those lists, then can decide which ones will see certain posts, like photos or status updates.

But creating groups is a more social exercise, Zuckerberg said. When one user creates a group, all the other members get notified. They can choose to leave, but will more likely engage, and create lists of their own, he said.

With another tool called "Download Your Information," Facebook users will be able to create a zip file of everything they've done on the site.

The announcement came with a bit of advice.

"This is all of your personal information," said product manager David Recordon. "You should take security seriously."

At Facebook, Zuckerberg said, it is "a core part of our belief" that people own the information they post on the site.

Facebook also announced a new apps dashboard that will make it easier to see what information applications can access about users.

In the past, Facebook had come under fire from some users for what they considered privacy invasion by third-party apps like games and quizzes. Many apps need access to a user's information to work, but critics feared that access could be abused.