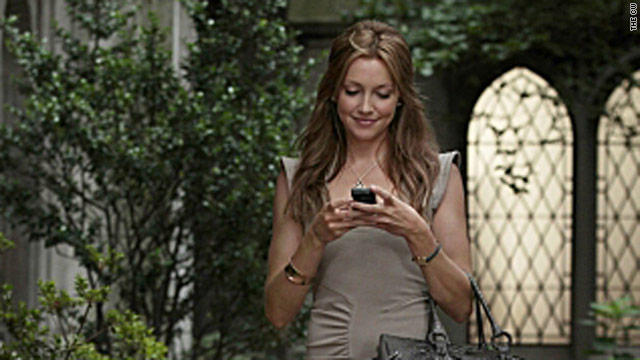 (CNN) -- Upon his release from prison in the new "Wall Street: Money Never Sleeps," corporate raider Gordon Gekko reclaims his belongings: A gold watch and a mobile phone the size of a 2-liter bottle of soda.

In case it wasn't clear until then, Michael Douglas' character had been behind bars for quite a while.

The scene gets a chuckle in theaters, and serves as visual shorthand for the passage of time. It also reinforces how technology, when used the right way in movies and TV, can set a scene, drive a storyline and, of course, make us laugh.

Without today's technology, "The Social Network," which is out Friday and tells the embellished story of Facebook CEO Mark Zuckerberg's journey from Harvard student to tech icon, wouldn't even exist. This currency seems to be creating buzz for the movie, which reviewers have praised as a chronicle of its Web 2.0 era.

From "2001: A Space Odyssey" to "War Games" to "You've Got Mail," computer technology has had a place in movies and TV shows for decades. But Wallenstein believes it's become more prevalent -- "a reflection of the fact that technology is more and more a distraction," he said.

"People who are on Twitter or playing video games -- those activities take away from TV and movies. What better way to bring them back than to incorporate these things in storylines?" he said.

"At the end of the day, both entertainment and technology are vying for peoples' eyeballs and peoples' brains ... there's a lot of multi-tasking. [Viewers] watch TV while they're twittering. It's a complicated relationship."

Technology has influenced plot lines on the small screen as well. TV shows like NBC's "Community" and the CW's "Gossip Girl" have both featured culturally relevant tech in recent episodes.

Gadgets and social-media references are period details in movies and TV as much as costumes are, said Brenna Ehrlich, a CNN.com columnist and writer at tech blog Mashable, a CNN.com content partner.

Now mobile devices such as smartphones and tablets make it easier for characters to interact with one another on the go, rather than hiding behind their computer screens.

Here are four ways that tech informs movies and TV:

In "Community's" season opener, Troy (Donald Glover) manages a Twitter feed called "White Man Says" where he posts the funny and offensive things that come out of Pierce's (Chevy Chase) mouth. The account draws comparisons to "(Expletive) My Dad Says," the Twitter feed managed by Justin Halpern that was turned into a new CBS sitcom.

On the current season of "Gossip Girl," a series that previously made little use of tech, one character used a location-based app like Foursquare to pinpoint another character's location. Later in the same episode, a group of girls watched a live stream on their cell phones.

"It's fascinating because ... the characters don't even really have smartphones," Ehrlich said. "You'd think a bunch of kids on the Upper East Side would all have iPhones."

The entire premise of ABC Family's "Pretty Little Liars," about a group of girls who receive text messages and e-mails from a deceased friend, rests on technology.

"The presence of technology is a plot device," Ehrlich said. "The cell phones are a whole other character on that show, but I didn't even really notice it until they got the [Microsoft] Kin. Its kind of embarrassing to pull out your Kin [phone] and show all the features."

Product placement occurs on TV all the time, whether viewers are aware of it or not, Ehrlich said.

At one point, "Gossip Girl" characters were really into Bing, Microsoft's search engine, and even used it as a verb, as in, "I'll Bing that."

"But no one says they're going to 'Bing' something. They say they're going to Google it," Ehrlich said. "Google has become like Kleenex or Chapstick," trademarked names that are synonymous with their products. "We notice [the product placement] more when it's unnatural like that."

ABC's "Modern Family" also had fun with product placement when the iPad made its debut in April. An entire episode was centered around early-adopter Phil's (Ty Burrell) birthday wish to own an Apple iPad.

"Product placement is a business transaction," Wallenstein said. "The Bings of the world want to be in places where they're expecting younger consumers to be consuming ... While product integration has this connotation of being overly commercial and selling out, you could argue it's [necessary because these products are] so much a part of consumers' lives."

It's about delivering authentic entertainment, he added.

It makes us laugh

The 2008 comedy "He's Just Not That Into You" featured a lovelorn character named Mary (played by Drew Barrymore) who was befuddled by tech.

"I had this guy leave me a voicemail at work, so I called him at home, and then he e-mailed me to my BlackBerry, and so I texted to his cell, and now you just have to go around checking all these different portals just to get rejected by seven different technologies." she said. "It's exhausting."

Rather than cringing at Mary's dated MySpace reference -- one of her coworkers called the social networking site "the new booty call" -- viewers laughed, Ehrlich said.

It reflects a time period

"You've Got Mail" came out only 12 years ago. But because it treats e-mail as a novelty, and Tom Hanks and Meg Ryan must dial onto the internet through their AOL accounts, it looks like a quaint relic from another era.

"Its fun to look back and watch 'You've Got Mail' and listen to the dial-up [noise], which no one has anymore," Ehrlich said. "It's a nice time capsule."

"The Social Network," which covers events from the mid-2000s, captures its time period through references to crude homepage designs and LiveJournal blog posts.

In this way, tech in entertainment can be a double-edge sword. It can make a movie or TV show feel current -- or quickly passé.

For that reason it's important to look ahead and make sure that when a movie is released or an episode airs, it's not dated by its technology, Ehrlich said. Less than two weeks after the girls on "Pretty Little Liars" cooed over their Kin phone, Microsoft announced it was discontinuing the product.