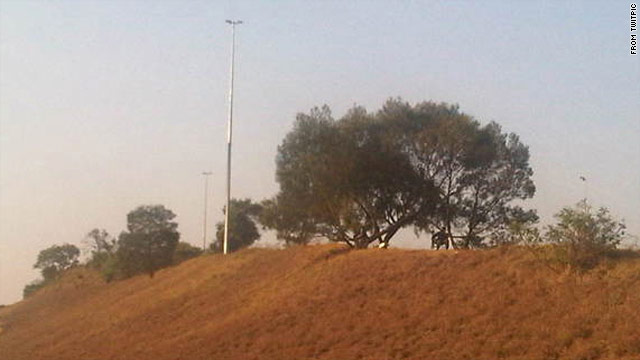 The Twitter user @PigSpotter posts photos and locations of cops in South Africa. This TwitPic shows a cop behind a tree.
STORY HIGHLIGHTS
RELATED TOPICS

(CNN) -- A controversial Twitter user has been challenging South African authorities by alerting thousands of followers to speed traps set by traffic police.

Now the Johannesburg police are pushing back, saying they have charged the @PigSpotter Twitter user with defamation, impairing the dignity of another person and "defeating the ends of justice," according to Johannesburg Metropolitan Police Department spokesman Wayne Minaar. He declined to name the person who has been charged or provide documentation of the charges.

"It is an obstruction of justice because we have a mandate to maintain order, and so we do set up traps to catch people who are breaking the law," said Zweli Mnisi, a spokesman for the Ministry of South African Police. "The information that is there can compromise the safety of the community."

Minaar said the charges were filed against the Twitter user on Friday.

The @PigSpotter Twitter user, who spoke with CNN via e-mail anonymously because he fears police retribution, said he started the feed to amuse his followers and to bring alleged police corruption to light.

"I am surprised by the amount of media attention. It was never the reason for starting PigSpotter," said the man, who has more than 17,000 Twitter followers. "Now that police corruption is in the limelight, maybe we can turn the negative into a positive, by working with the police, rooting out the bad apples/corrupt members, we can restore faith into the police of South Africa."

Mnisi denied the charges of police corruption. "We are not out there to punish people," he said. "We are not being hard or inhumane."

@PigSpotter has become known in South Africa for alerting the public to police speed traps, which are often intended to be hidden from the view of drivers.

The idea is not entirely new. Other Twitter feeds, including @SpeedTrapsFL in Florida, alert followers to the presence of cops and speed traps. That feed appears to take input from people in Florida in order to ID the traps.

"SPEEDTRAP!!! Turnpike northbound in Pompano. FHP trooper parked under Sample Rd. overpass on right side. Look out!!" a post on @SpeedTrapsFL says.

And smartphone apps also serve similar functions. Trapster, for example, an app available for the iPhone, Android, BlackBerry and others, collects speed trap info from more than 8 million users and then plots the data on a map.

The @PigSpotter feed is known for a witty writing style, posting photos of the cops and using derogatory terms such as "pigs" and "bacon" to describe members of the police force. That language is what resulted in the defamation charge against @PigSpotter, the Johannesburg Police spokesman said.

In one post, @PigSpotter outed a cop with a photo and context:

Another tweet says, "Cops Hidding [sic] in bushes & trapping" before listing a location. Still another says: "lady in blue HIDING behind a billboard on the M1 South just after Goldreef taking vacation pics."

Despite the police attention, the Twitter feed continued to be active on Monday.

Police say information provided by the feed is generally correct.

"The funny part is almost all of his information is accurate, so we are investigating if it's a group of people or just one person because all of his predictions are correct," said Mnisi of the Ministry of South African Police.

The person behind @PigSpotter told CNN he is willing to work with police.

"I will not stop reporting on speed traps and traffic congestion, even when they are visible," he wrote in an e-mail. "I am however willing to work with the police to stop the corruption within the police force."