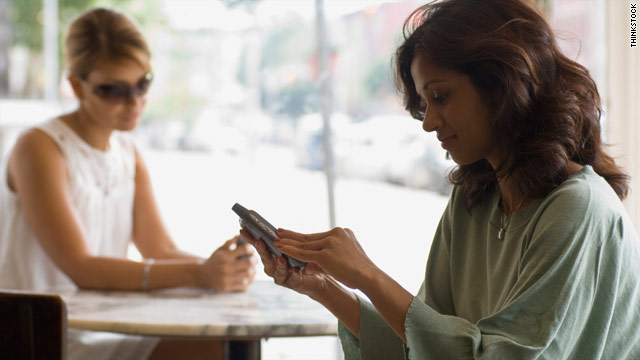 Some users say Facebook Places enhances their mobile experience on the networking site, while others are less enthusiastic.
STORY HIGHLIGHTS
RELATED TOPICS

(CNN) -- It's been two weeks since Facebook users took to blogs and message boards to voice their concerns about Places, a location-based service that allows people to check in to gathering spots via the social network.

After firsthand experience with Places, some users still worry that the service could compromise their privacy. But others are finding that when used with caution, the new feature can be useful and is enhancing their experience on the site.

Eric Rummel of Los Angeles, California, who used to post his location in his status updates, said Places is an easier, fun way to tell his friends what he is up to. But Rummel understands why some people are leery of posting their whereabouts on the site.

"People think it's about stalking and this and that, but only my friends can look at my page. If you're selective of who your friends are, it's definitely a plus to have Places," he told CNN.

"It's a great way to get to know your city," he said, adding that last week, he checked in to a little-known Caribbean restaurant his friends seemed really excited to learn about.

Rummel said that just to be safe, he probably won't make checking in to his own home a habit, but he did add its location to Facebook.

"It was one of my first posts," he said. "I was just playing with it and wanted to see if they had my home location. I don't think I would do it all the time, though."

If Facebook users "check in" to a restaurant or other hangout, their whereabouts immediately pop up on their page and in their friends' news feeds. Users who prefer not to disclose their locations can disable the feature, or set it so others aren't able to check in for them.

Nathan Bolos of Greensboro, North Carolina, didn't have any privacy concerns when he started using Places to check in at his college, work, restaurants, movie theaters and his own home. His sister, on the other hand, is not a fan of the new feature.

"I checked in at my sister's house. She didn't really like it," he said. "It showed a map of the area and how to get to her house. She has small children, so she wasn't really happy about it. She made me take it down."

And that's not the only time Places has revealed more information than Bolos intended. After he and his new love interest both checked in to the same place, their friends put two and two together and realized the pair had begun dating. Though, he said, they weren't consciously trying to keep their relationship a secret.

"[But] I love the feature," he said. "It helps me check in during the day so people don't have to call me and ask where I am. I just push a button, and it does all the work for me."

Others don't agree. Bolos' sister is one of many people who take issue with the fact that Places allows users to check in their friends.

Kunur Patel, a reporter at Advertising Age, wrote a blog post, "How to Almost Sabotage a Dinner Party With Facebook 'Places,' " about her experience with the feature.

Patel checked herself, husband and two of their friends in at Zenon Taverna, a Greek restaurant in New York City, without asking their permission first.

When she told them what she had done, "shock ensued," she wrote. "To my surprise, the group was appalled that I could tag their locations without them knowing." One friend later untagged himself.

Patel said she hasn't checked in anyone else since that night, although she continues to use Places to post her own location.

What it boils down to, she said, is who is in your network, and why. People join location-based services such as Foursquare, for example, because they want to share their whereabouts or get discounts from businesses.

But Facebook was not built on that concept, she said.

Some of the concern, and confusion, about location-based services may stem from the fact that they are still unfamiliar to most social network users.

A July survey by Forrester Research found that only 4 percent of U.S. online adults had used location-based social networks on their mobile phones, and only 1 percent used them more than once a week.

"The market is quite nascent, with only a few million consumers using geolocation apps monthly," Forrester said in a statement accompanying the survey.

Granted, the study was published about a month before Facebook debuted its Places application.

Kayla Hanocka first learned about location-based services through her sister, who checked in to Foursquare during a recent monthlong RV road trip. The app allowed Hanocka to track her sister and her 15-year-old son on their travels across the U.S.

But the 48-year-old from Norwalk, Connecticut, didn't give in to the location craze until it hit Facebook last week.

So far, Hanocka has checked in at only two locations -- a hotel and a local movie theater. Since she uses her iPod Touch to access the service, she can check in only when there's Wi-Fi available. But she said she definitely sees herself using Places more and more.

New-media consultant Sarah Evans of Chicago, Illinois, said she always published her Foursquare updates to Facebook because "it's the network I was most comfortable sharing that information on." So when Places launched last month, she said, it just made sense to switch over.

"Even if it's a false sense of security that it's a more secure network of friends, family and contacts I've met, there are more privacy settings [on Facebook]," she said. "I'm more comfortable with it."

But Evans still has some qualms about posting her location, which is why she doesn't check in at her home, her local grocery store or any other haunts near where she lives. She will, however, post locations related to professional activities, such as when she took her public relations team out to eat for National Waffle Day and checked them all in at a pancake restaurant.

"To each his own," she said. "It is personal posting where you're at. ... [But] most of us really love it -- the social media and tech crowd. [It's great for] meet-ups and after-parties, seeing trends evolve about where people are at. If you're not comfortable using it, then don't."