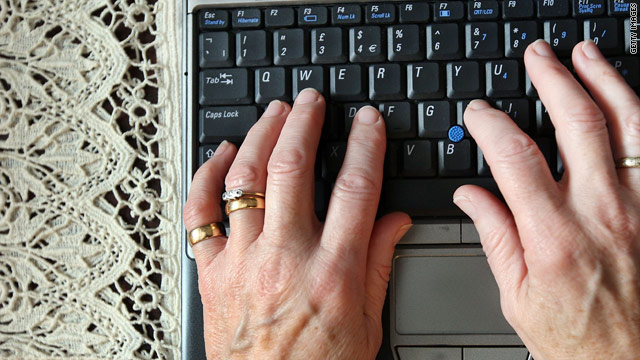 While younger people are the majority on social-media sites, the number of users over 50 is the fastest growing, a survey says.
STORY HIGHLIGHTS
RELATED TOPICS

(CNN) -- Nancy Ehrlich was nearing 50 and frustrated, teaching at her small Pennsylvania town's elementary school with colleagues who didn't share her love of technology.

Now, Ehrlich -- who turns 51 in a few weeks -- barely qualifies for the fastest-growing club on the Web. The number of internet users over 50 who use social-networking sites such as Facebook and Twitter have nearly doubled in the past year, according to a study released Friday.

"It definitely has changed my whole life -- that's how significant Twitter is to me," said Ehrlich, who now regularly chats with educators around the world and helps host a weekly forum for them on the micro-blogging site. "At first, I didn't really get it. But I just kept watching it and, before you knew it, I was hooked."

Between April 2009 and May, the percentage of internet users 50 and up who said they use social-networking sites has risen from 22 percent to 42 percent, according to the survey by the Pew Research Center.

Respondents 65 and older reported a 100 percent increase, while those between 50 and 64 jumped 88 percent.

By comparison, the number of users from 18-29 who said they use networking sites rose a much more meager 13 percent.

For anyone who logs on to sites such as Facebook and Twitter, the increase in older users is probably pretty obvious.

It's not unusual for three generations of one family to chat on Facebook now. (Yes, teenager, that means grandma might comment on your angst-ridden status update.)

And just last month, Ivy Bean, who, at 104 was believed to be the world's oldest active Twitter user, passed away in England -- a sad event tweeted by nursing-home staff to her more than 60,000 followers.

But the Pew report highlights just how dramatic, and fast, the spike in older users has been.

"Young adults continue to be the heaviest users of social media, but their growth pales in comparison with recent gains made by older users," said Mary Madden, a senior research specialist with the Pew Research Center's Internet & American Life Project and author of the report.

"E-mail is still the primary way that older users maintain contact with friends, families and colleagues, but many older users now rely on social-network platforms to help manage their daily communications."

Roland Provost, 65, said he's definitely noticed the increase. He's been on Twitter and Facebook -- as well as being an active "World of Warcraft" player -- for several years.

"It's been a major evolution in the last year or so ...," said Provost, of Dover, New Hampshire. "Almost all my old high school friends are on. It's been amazing to reconnect.

Older users often say keeping in touch with family and friends is a key reason they use the networking sites.

"There are few other spaces -- online or offline -- where tweens, teens, sandwich generation members, grandparents, friends and neighbors regularly intersect and communicate across the same network," Madden said.

And while the stereotype of older users has been that they only log in every so often to look at pictures of the kids or grandkids, the report suggests otherwise.

About 44 percent of respondents who said they use Facebook-like sites said they had used one within a day of when they got the phone call.

They still have a long way to go to catch up with younger users, though -- by comparison, 86 percent of 18- to 29-year-olds say they use social-networking sites.

"Facebook is the people I went to high school with and Twitter are the people in my life now," said the Ambler, Pennsylvania, teacher. "For my age group, it's a very reflective time in our lives, so that's why I think Facebook is so popular.

"But as a teacher, I had a different agenda. I wasn't looking to reconnect with people, I was looking to learn and feel challenged."

The Pew report is based on a nationwide telephone survey in the United States of 2,252 adults. The margin of error is 2 percent for the total group and 3 percent for internet users.