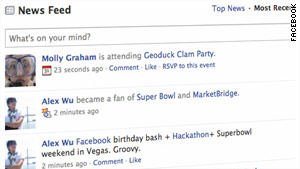 (CNET) -- The long-rumored geolocation "check-in" feature at Facebook is slated to debut within weeks, multiple sources familiar with the matter told CNET.

It's going to take the form of an application programming interface (API) for third-party companies on the Facebook developer platform, integrating existing "check-in" start-ups more deeply into the massive social-networking service and in turn permitting location-aware data to become a part of existing platform applications.

"We are working on location features and product integrations, which we'll be launching in the coming months, and we'll share more details when appropriate," spokesman Larry Yu told CNET.

Among developers, too, Facebook is still being tight-lipped regarding the exact nature of the service; the API work has not yet been finalized, though one source in the developer community said that engineers at Facebook "are building it out hard-core" at the moment.

Another source hinted that the internal development deadline may be as early as next week, but that Facebook has not been clear about whether this will be reached on time or extended.

At least one start-up in the geolocation space was told by a Facebook insider that it might want to think about changing the language of a thumbs-up type of feature to "like," possibly preparing for integration of Facebook's ubiquitous "like" buttons.

Sources say that Facebook has partnered with Localeze, the local-search company that powers Twitter's "Places" directory -- which lets Twitter users attach a location to their tweets if they are posting from a location-enabled device -- to provide a business directory infrastructure for the forthcoming geolocation product.

"We cannot comment on any future deals, however can say that we anticipate having a few significant social announcements in the coming weeks/month," a Localeze representative told CNET via e-mail.

Additionally, a recent minor acquisition on Facebook's part may turn out to be integral to its geolocation plans.

Earlier this summer, Facebook acquired a second-tier "check-in" service called Hot Potato, which focused on letting members check into events rather than locations.

That acquisition has closed with a final price tag of about $10 million, the lion's share of it going to founder Justin Shaffer. Facebook's interest in the New York-based Hot Potato, specifically Shaffer's product management talent, goes back quite some time. Sources told CNET that Facebook had originally approached the start-up as early as March about a potential acquisition.

Shaffer did not respond to a request for comment.

The Hot Potato product will almost certainly be shut down, and Shaffer is relocating from New York to work in Facebook's San Francisco Bay Area headquarters, sources said.

One source said that Shaffer, who obviously was quite the expensive "hire" for Facebook, may have a crucial role in the forthcoming geolocation product.

But multiple sources also hinted that, given Hot Potato's focus on checking specifically into events, he may also be charged with revamping Facebook's own event listing and invitations product.

It's possible that it could work both ways, and that Facebook Events would be one of the existing Facebook features into which geolocation would integrate first.

It's been known for quite some time that Facebook wanted to capitalize on the growing phenomenon of geolocations and "check-ins," to the extent that onlookers were surprised when the social network didn't announce a geolocation product at its F8 developer conference this spring.

Start-ups like Foursquare, Loopt, and Gowalla were getting the press, not big players like Facebook or Google (whose Latitude location-sharing platform hasn't become much of a sensation).

Since then, Foursquare has begun to pull away from the competition and make inroads into bringing the check-in market from the early-adopter crowd to the mainstream, and Twitter's geotagged tweets have been live for months now, too.

It should be noted that Facebook also expressed interest in outright acquiring Foursquare, as was well-reported amid the media frenzy over whether Foursquare would raise another round of funding or would sell to a prospective suitor -- namely Facebook or Yahoo. (It opted for the venture funding in a round led by venture firm Andreessen Horowitz.)

One source told CNET that Facebook offered Foursquare $120 million; Foursquare asked for about 25 percent more than that and Facebook walked away from the negotiations.

There are, of course, complications, which leave the geolocation- and local-services start-up community with plenty of questions about how much of their data they will have to share with Facebook if they tap into the new APIs.

And additionally, Facebook's tendency to garner bad press with regard to privacy may make some of them wary of getting involved.