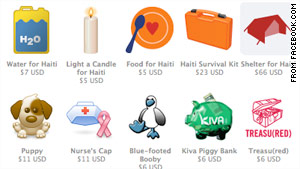 Gifts that raise money for charity are options in the Facebook Gifts store, which closes August 1.
STORY HIGHLIGHTS
RELATED TOPICS

(CNN) -- The days of digital birthday cakes, virtual bottles of champagne and other cutesy icons from Facebook are numbered.

Facebook Gifts, the virtual shop born out of a 2007 "hackathon" by FB staffers, will close on August 1, even as the social networking giant looks for other ways to make money.

"Closing the Gift Shop may disappoint many of the people who have given millions of gifts, but we made the decision after careful thought about where we need to focus our product development efforts," product manager Jared Morgenstern wrote on Facebook's official blog.

"We'll be able to focus more on improving and enhancing products and features that people use every day, such as Photos, News Feed, Inbox, games, comments, the 'Like' button and the Wall."

Facebook allows users to buy virtual credits that can be cashed in for digital gifts, such as bouquets of flowers, to be sent to friends' pages on the social networking site. Most of the virtual items cost the equivalent of about $1 apiece.

Ditching the gift shop suggests that its popularity has dipped as it competes with free Facebook apps, like Pieces of Flair and Birthday Calendar, that let users hand out similar digital goodies.

People who have gifts displayed on their wall will not lose them when the store is closed, Morgenstern wrote. Users also will still be able to view a page showing all the gifts they've given and received.

Morgenstern, who helped create Facebook Gifts for Valentine's Day in 2007, called the ending bittersweet. But he credited the feature with launching Facebook Credits, the virtual cash used most often for premium items in massively popular Facebook game apps like FarmVille.

Some users mourned the end of the gift shop.

"I am actually upset by this," one user wrote. "I hate third-party apps for it because they are full of spam and stuff you do not want. I fail to see why this has to actually disappear. It's working fine right now as it is."

But many of the more than 1,000 commenters appeared to be less concerned about the change.