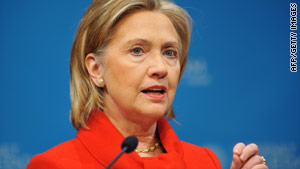 Secretary of State Hillary Clinton has made the spread of information technology and internet freedom a cornerstone of her foreign policy.
STORY HIGHLIGHTS
RELATED TOPICS

That's what a pair of young State Department officials found in Syria, where they were leading a trade delegation of Silicon Valley executives. Their bosses back in Washington were mortified when media blogs picked up the musings of Alec Ross and Jared Cohen on Twitter about which Syrian cafes serve the greatest frappuccino (Kalamoon University) and their challenge to the Syrian telecom minister for a cake-eating contest (called "Creative Diplomacy.") Creative, indeed.

It was a mild, but unfortunate distraction from what was widely considered an otherwise productive mission. The delegation of senior executives, from tech heavyweights like Microsoft, Cisco Systems and Dell, met with Syrian President Bashar al-Assad and other officials, as well as businessmen, civil society groups and academics battling their government's tight-fisted control on the internet.

The visit illustrated both the opportunities and the landmines Hillary Clinton's State Department has to navigate as it logs into the digital age.

In Foggy Bottom, one needs to be fired up about being wired up. Blogging and tweeting are now part of every diplomat's job description. At any given moment you can find someone like the top official on Latin America tweeting in Spanish about his latest trip to Peru, or Secretary Clinton herself posting podcasts on the State Department website and soliciting questions from the public on the State Department's blog, Dipnote.

Ross, a 38-year-old former technology adviser to the Obama campaign, and his partner in crime, Jared Cohen, a 28-year-old author on genocide, youth and jihad who joined the State Department during the Bush administration, are at the forefront of a new push by Clinton to use technology and social media as a diplomatic tool. Since taking office, Clinton has made the spread of information technology and internet freedom a cornerstone of her foreign policy, hoping both will serve as catalysts for spreading democracy.

It used to be one of the biggest carrots the State Department could dangle before a country was a visit by the secretary of state. Now it is a delegation of Silicon Valley heavyweights led by Ross and Cohen, which might include executives from Microsoft, Google or Facebook.

Since the Obama administration took office, they have led delegations with executives from tech giants such as Google, Facebook and Twitter to Iraq, Russia and Mexico with some tangible results. In Iraq, Google created a project to make digital copies of 14,000 antiquities in Iraq's National Museum. And in Mexico, the delegation helped develop a network for Mexicans to report drug-related crimes by cell phone.

The visit to Syria came as the Obama administration takes baby steps toward engagement with that nation. The United States had not had an ambassador in Damascus for five years and the administration's efforts to fill that post have been stymied by Congress.

The U.S. delegation was requested by President Assad himself earlier this year in meetings with senior U.S. officials. The United States hopes playing to Assad's desire to modernize his economy and stated willingness for better diplomatic and trade ties with the Obama administration could drive a wedge between Syria and Iran, its closest ally.

Moreover, the United States hopes facilitating the flow of information into Syria will create a more open political climate there. While in Syria, the delegation was surprised to find many young entrepreneurs with a widely different attitude about the outside world and a desire to network into it, including one young woman who, during a session with the deputy IT minister, looked him straight in the eye and asked for more access to the internet.

Strict U.S. sanctions against Syria for its support for terrorist groups in Lebanon, Iraq and the Palestinian territories ban the sale of most technology to Syrian markets, but the White House does have waiver authority to sell certain products to Syria, and the purpose of the trip, in part, was to help facilitate American technology companies to enter the Syrian market.

The Obama administration has eased exports of certain telecommunication products in countries where they were once banned, including Cuba, Iran, Sudan and China, out of fears repressive regimes would use them to oppress their people.

"We are not naive," Ross said. "... Syria says it needs this technology for it's economic development. We understand that, but we were very careful about the companies we selected for this delegation. We won't support technology being reverse-engineered."

The Syrian government has blamed the sanctions for its economic stagnation. But the executives, whose companies have a combined market value of close to a half a trillion dollars, delivered a blunt message to the regime in Damascus -- one which can't be delivered credibly by the US government: Our companies won't do business in a country without internet freedom or protections for intellectual property.

"They painted a picture of what Syria could have," Cohen said of the delegation. "What they could invest in if Syria took certain steps." During the visit both Cisco and Microsoft raised the possibility of training in Syria under the right conditions.

As a result of the visit, the Syrians pledged to pass an e-commerce law that would provide safeguards against government censorship or infiltration of internet sites, something the Obama administration had pushed for. But U.S. officials made clear further steps would be based on Syria's actions on loosening the information chokehold, rather than its promises. Ahmed Salkini, a spokesman for the Syrian Embassy in Washington, said his government is dedicated to "creating an environment conducive for the work of IT companies and hopes to pass the e-commerce law "in the very near future"

Salkini said the Syrian government found the delegation was successful in scoping opportunities for future cooperation.

"We constantly encourage private sector interaction between the U.S. and Syria," he said. But he added, "We think the only way for this type of cooperation to succeed is with a lack of governmental interferences and lack of political agenda from both sides."

This month Ross and Cohen will lead a delegation to Colombia and later this year, it's on to India.

They are a couple of virtual and diplomatic soul mates, virtually attached at the hip and finishing each other's sentences. Both have become Twitterati (celebrities on Twitter) in their own right, as they tweet their way around the world spreading the gospel of 21st century statecraft. Ross has some 287,000 followers on Twitter, while Cohen -- who gained notoriety last year when he asked Twitter to delay scheduled maintenance to allow the Iranian opposition to continue to use it to organize after the disputed election -- has about 305,000.

They are the public face of an effort at the State Department to wire the unwired. Clinton recently told a group of Russian civil society groups visiting Washington, "We have a great team of really dedicated young people -- primarily young people -- who care deeply about connecting people up. And I'm very proud of the work they're doing."

If they have a corner on the 21st century statecraft market now, it won't be for long. Recently Ross trained 50 European ambassadors on how to implement the concept in their own countries. His goal, he says, is to create a community in which countries can share their technology innovations among each other. For example Kenya, a pioneer in mobile banking, could help spread the concept to its neighbors and beyond.

After their Syrian adventures in Twitterville, Ross and Cohen were advised to continue to use the technology, but avoid the minutiae. Still, State Department officials believe the digital duo is good for business, drawing in a new generation of individuals interested in U.S. foreign policy.

"What they do has tremendous value," said Assistant Secretary P.J. Crowley, the State Department's spokesman. "Whatever they put in their tweets, they have 600,000 Twitters followers that are now connected in some way to the State Department. And I will take that to the bank."