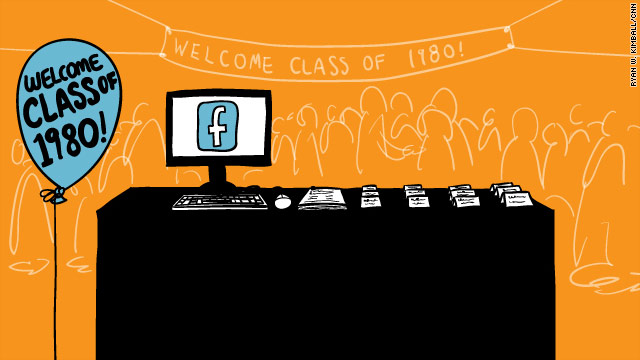 Facebook networks encourage many people to attend school reunions but may dissuade others.
STORY HIGHLIGHTS

(CNN) -- If you'd asked Bekki Scotto a few years back about her interest in attending a high school reunion, she would have rolled her eyes and laughed in your face.

Uprooted from Northern California as a 12-year-old after her parents divorced, she landed in Bismarck, North Dakota, where she was a stranger in a strange land.

"I was a weirdo, and I always was until I left," said Scotto, 40, who loaded up her Volkswagen bus right after graduation and high-tailed it back to the West coast. "I hated high school. My memories are mostly of tortured poetry and plans for escape."

But a funny thing happened in recent years: She discovered Facebook. And the social networking tool stirred up an interest in old classmates that she didn't know was there.

Scotto, a textile artist in Eureka, California, signed up for the social networking site not knowing that "it was HS reunion central ... or I might not have joined," she wrote in an e-mail. And suddenly she was reconnecting with people from the Bismarck-area's Mandan High School and revisiting stories she'd long forgotten.

"Surprisingly enough I DID have friends. We did do fun things, and I actually have a few fond memories," she said in the e-mail. "That was a revelation that never would have happened without Facebook... I know a bit about everyone and am remembering friends I'd actually like to see."

Facebook may bring people like Scotto (who missed her 20th, which came before she'd signed up for the site) to reunions that never would have come otherwise.

But the site might also have an adverse effect on the face of school reunions. If you can learn what's become of your old pals or your secret crush from the comfort of your couch, do you lose the incentive to actually go? Once you discover your prom date is now a married, balding insurance executive in Poughkeepsie, is the curiosity factor gone? 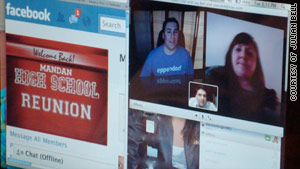 Jason Bell, Julian Bell and Maria Black chat via webcam on a Facebook page set up for grads of Mandan High School.

Bell created the Facebook page for all graduates of Mandan High to help them plan reunions -- big and small -- and find each other. He believes the page's influence is already being felt, as turnout for school gatherings is on the rise.

"You get a lot of fun laughs, and you're able to reconnect with people you might not have time to connect with at the reunion," said Bell, also 40.

An added plus, said Mandan grad Jami Bjorndahl, 32, is that Facebook helps cut through the initial nerves of first contact.

"It does take away that awkwardness of wondering what people will think of how you've changed," said Bjorndahl, who now lives outside of Washington. "All those silly things high school kids do to one another have been forgotten. That person who 'wronged' you has forgotten all about it, while you may have been holding onto it for the last 20 years."

By revisiting high school relationships years later, there may be this renewed level of acceptance of one another, said Florence Kaslow, a life coach and south Florida psychologist of more than 30 years who's studied reunions of all sorts.

But beware the traps of "virtual friendships" or "pseudo-intimacy" that sites like Facebook or MySpace can manufacture, Kaslow warned. When former classmates who are "friends" on Facebook see each other face-to-face, "It can be disappointing ... They may not be like anything they've written."

One of the pros of Facebook is that the site has allowed former classmates, even entire communities, to bond for missions beyond socializing.

In advance of his late May reunion in Stroud, Oklahoma, avid cyclist Jeff Burton signed up for Facebook and launched a page entitled, "I'm Riding My Bicycle On Route 66 to Attend My 50th High School Reunion."

He then spent most of May riding from Santa Monica, California, to his old hometown and writing about it along the way. Classmates helped turn his journey into a fundraising campaign for Stroud High School and built a separate website for the cause.

"I became friends with anyone who had connections with Stroud, Oklahoma," said Burton, 67, who lives in Santa Rosa, California. He estimates that they raised about $10,000 for the school. "I didn't want it to be about me," he said. "I was just willing to be the poster child."

For those who cannot make it to their high school or college reunions, Facebook helps lessen the disappointment.

"Of course I'd love to go and see people face-to-face and run into people who aren't on Facebook," said Nancy Corradini, who's missing her 40th Alhambra High School reunion in Southern California this September because she has a wedding to attend.

But it "sure has made it easier to miss the reunion as I have already caught up with everyone," she said.

Her classmate, Karen Spencer, however is definitely on board. She missed her 30th, but this one -- not a chance. Spencer has no excuse this time -- she created the Facebook page for her class and in the process began reaching out to find classmates.

"I probably reconnected with 80 people, and these are people I probably know better now than I did in high school," said Spencer, a policy consultant who lives outside Sacramento, California. She believes reconnecting on Facebook will allow her and her classmates to skip much of the awkward small talk that occurs at reunions.

"We don't have to say, 'How many kids do you have?' We've already covered that," she said. "We're going to feel like old friends."

In fact, Facebook has made Spencer feel so connected to former classmates that her friend pool is expanding in ways she never saw coming.

"Today, a really good friend of mine from high school wrote," she said recently. "I'm now friends with his friggin' dog."