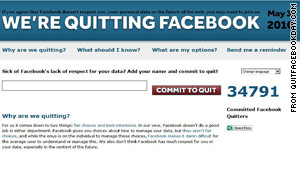 (Mashable) -- Monday was Quit Facebook Day, and for all intents and purposes, it was a bust.

According to the group's homepage, only 34,000 users vowed to "quit Facebook" -- and remember, committing to quit and actually quitting aren't the same thing.

While the debate over Facebook and privacy is far from over, those concerns are trumped by the utility of the actual service. At least for now.

Now, our poll was far from scientific, but it does offer some anecdotal food for thought. What we've been hearing from readers over the last few months isn't that privacy concerns or fears are unwarranted -- Facebook users do seem to be uneasy with some of the changes to the service and its growing reach -- but that the service itself is ultimately too important as a way of communication to give up.

The long-term impact of the latestprivacy control updates remain to be seen but it looks Facebook has emerged from this round of privacy warfare relatively unscathed -- at least for now.