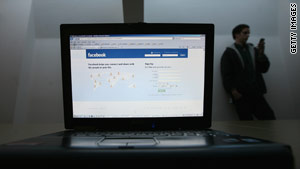 The recent focus on Facebook started with its announcements in April at the F8 developers conference.
STORY HIGHLIGHTS
RELATED TOPICS

On Friday, a House of Representatives committee responsible for writing some electronic privacy laws sent a letter to Facebook CEO Mark Zuckerberg asking for details on when the company shared user data "without the knowledge of the account holders."

The letter, written by Democratic chairman John Conyers of Michigan, suggests that the committee will eventually hold hearings on whether the Internet's second most popular site has -- at least in the minds of a handful of politicians -- acted responsibly in disclosing its data-sharing practices to its users.

Last week, Zuckerberg convened a press conference at the company's Palo Alto, California, headquarters to announce what he called a "simpler" and more streamlined way for users to protect their privacy.

While the recent focus on Facebook started with its announcements in late April at the F8 developers conference, which included deeper connections with partner Web sites, the concerns have been building for a long time, prompting some politicians to call for a Federal Trade Commission investigation.

There was the outcry over the now-defunct Beacon advertising program, Zuckerberg's remarks last December about pushing users to disclose more, and brief eruptions including last month's disclosure of Facebook sharing some data with advertisers in possible violation of its privacy policy.

That letter asks Google to "retain the data collected by its Street View cars, as well as any records related to the collection of such data, until such time as review of this matter is complete."

Three House members, including the chairman of a different committee, wrote to Schmidt last week also asking for questions; Conyers' letter appears to be an effort to emphasize that his committee also has plans to look into the topic.

Google has acknowledged that because of a programming error, its Street View cars had intercepted fragments of data from unencrypted Wi-Fi networks for periods of 200 milliseconds at a time. It has been working with government authorities, including ones in Europe since then, to properly dispose of the intercepted data.