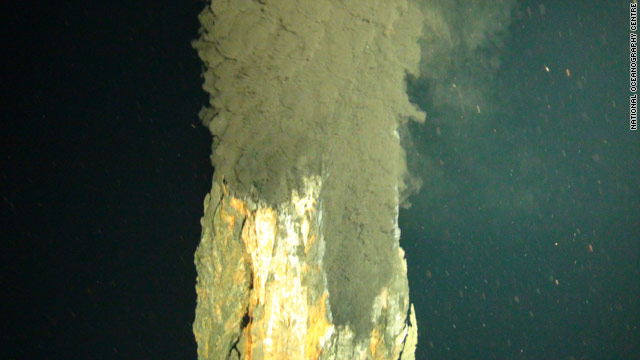 (CNN) -- A team of British scientists surprised the world this week with its discovery of volcanic vents spewing superheated water from a trench three miles below the surface of the Caribbean.

The vents, nicknamed "black smokers" because they gush sooty columns of what looks like smoke, were found 5,000 meters deep in the depths of the Cayman Trough, the world's deepest undersea volcanic rift.

Scientists found the vents with the help of instruments towed behind their ship and a robot submarine, which helped them explore previously undocumented undersea depths.

"It's a start of a new era in exploration," said expedition leader Doug Connelly, a geochemist with the National Oceanography Centre in Southampton, England.

Volcanic vents are cracks in the Earth's crust that allow magma, gas and other material to escape the surface. Water surging from the smokers can be as hot as 760 degrees Fahrenheit -- hot enough to melt lead -- and may contain never-seen-before marine creatures that could yield clues to how life started on Earth, scientists said.

"Deep sea vents tell us more about how our planet works," said Jon Copley, a marine biologist at the University of Southampton School of Ocean and Earth Science. "Most of the geological processes that shape our world take place deep underwater, and deep sea vents are a part of that."

Copley and Connelly spoke to CNN from aboard the RRS James Cook, a research vessel holding 28 scientists and engineers from seven nations. They set sail March 21 from Trinidad.

The Cayman Trough is a deep rift in the seafloor that runs east-west between Cuba and Jamaica. The researchers set out to explore a chain of undersea volcanoes that run north-south across that rift, just south of Grand Cayman.

First, they mapped the seafloor of the Cayman Trough in detail, using the ship's multibeam sonar and an instrument that is towed behind the ship on such a long cable that it was a few hundred meters above the seafloor.

Then, a pre-programmed robot submarine was sent to hunt for deep-sea vents in the abyss. The sub collected data and transmitted it to the ship, where instruments measured the temperature of the water and looked for the presence of smoke or volcanic compounds.

It was a painstaking process.

"Each deep sea vent is roughly the size of a football stadium and at the bottom of a very dark, deep ocean. They're extremely hard to pinpoint," Copley said.

"It takes a lot of technology. It's actually been only 80 years since people managed to get into the deep ocean. So it's really one of the youngest sciences that we have."

On April 6, crew members began getting a strong signal from the ocean depths. So they sent a human-size cube -- measuring 6 feet by 6 feet by 6 feet -- equipped with cameras and lab sampling equipment into the trench. To their joy and surprise, the cube returned with images and video of the vents.

"Seeing the world's deepest black-smoker vents looming out of the darkness was awe-inspiring," Copley said. He described seeing superheated columns of black water billowing from slender mineral spires, or chimneys, that rise two stories from the ocean floor.

"That very tight structure of the chimney is what's allowing it to vent out so dramatically -- it's a very beautiful venting," Connelly said. "They're very hypnotic to watch."

Researchers aboard the RRS James Cook have been sharing their scientific journey with the public through daily updates on their Web site.

"Exploring the deep ocean for us is a great scientific adventure, and we would like to share that with people as much as possible," said Copley.

Members of the team will continue to conduct research in the Cayman Trough before concluding their expedition in Montego Bay, Jamaica, on April 21.

In an effort to collect more detailed data on the biology, chemistry and geology of the newly discovered vents, Copley and his team of researchers plan to set sail again in early 2011.

"Nineteenth-century naturalist explorers used to go to previously unexplored islands above the waves, like the Galapagos, and they made discoveries that told us about patterns of life on land," Copley said. "We're still doing that 200 years later to understand what's going on in the deep ocean."

The research project is funded by the UK's Natural Environment Research Council and is estimated to cost $1.5 million.