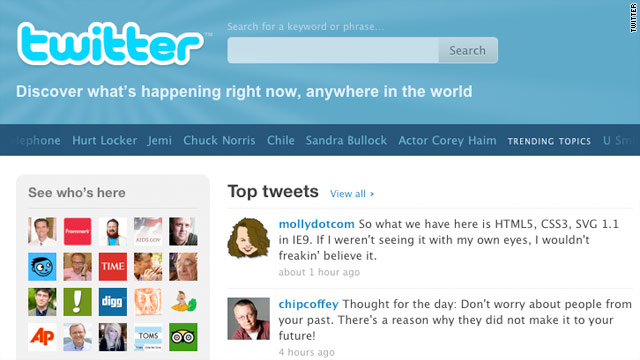 (CNN) -- Twitter's homepage got a new look Tuesday, featuring a scrolling list of "top tweets" designed to give non-members a look at what they're missing.

The new design, which Twitter called a test and a "work in progress" on its official blog, is topped by a banner featuring Twitter's top trending topics. Scrolling over those topics gives an explanation of why a particular word or phrase was popular at that time.

Below that is a feed that looks similar to a Twitter user's live feed, featuring a constantly changing list of 140-character (or less) messages.

"With the new design, we're intentionally featuring more dynamic content on the front page, revealing a sample of who's here, what folks are tweeting about, and the big topics that they're discussing," Twitter said in its blog post.

The blog said the top tweets are "algorithmically-selected" but offered no further details.

Twitter's new main page also features a block of suggested users of the micro-blogging site, allowing someone viewing the page to scroll over that user's photo to see his or her most recent tweet.

"All of our recent changes embrace the notion that Twitter is not just for status updates anymore," the blog said. "It's a network where information is exchanged and consumed at a rapid clip every second of the day.

"With so much being shared, we know that there's something of value for everyone."

In January, the site began unveiling changes with the goal of making the Twitter experience more personal for users.

It switched its main "Suggestions" list from a spate of celebrities and top media feeds to a rotating list of popular users organized by topics a new user might find interesting.

The site also added a feature letting users follow trending topics based on their location or personal interests, not just the top 10 most popular trends on the entire site.

Tuesday's blog post said Twitter will be monitoring how users respond to the new homepage and tweaking it accordingly.