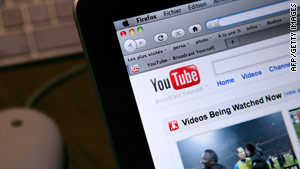 Video-sharing site YouTube was down for about an hour on Thursday.
STORY HIGHLIGHTS
RELATED TOPICS

(CNN) -- Google Inc., owner of YouTube, said an outage of the popular video-sharing site Thursday was technical and not caused by outside tampering.

"YouTube is up again following a technical issue which has now been resolved," a spokeswoman for Google said in a written statement. "We know how important YouTube is for people and apologize for any inconvenience the downtime may have caused."

The outage apparently lasted for just over an hour, from roughly 7 to 8 a.m. ET.

A YouTube source said the outage was not the result of any kind of attack or related in any way to Google's recent move to stop censoring results in China.

The timing of the outage, just days after Google's announcement, had spurred speculation online.

During the time YouTube was down, Internet users were still able to access individual videos, but YouTube's main page returned a "Http/1.1 Service Unavailable" message.

The source said it's Google's default policy to not discuss the details on the cause of outages.

The search-engine giant has been embroiled in a public feud with the communist nation since January, when Google said it was the target of a "highly sophisticated and targeted attack" originating in China.

"I think many people are, understandably, looking for China to take some unique and extraordinary technical measures to 'punish' Google," said Ron Deibert, director of the Citizen Lab at the University of Toronto's Munk Centre for International Studies.

But he said that nothing along those lines has been made public.

"So far, what I have seen is business as usual, and this includes the filtering that is happening at the backbone/gateway levels that have been more or less consistent for a long period of time.

"As for the source of the YouTube problems, I am sure they are investigating, and it could be a billion problems, just as it was for Wikipedia, which turned out to be a server cooling problem, according to reports."

Google began operating in China in 2006, agreeing to limited censorship of what the government there considers controversial sites.

A dashboard page posted by Google after it made its announcement shows that YouTube, one of the Internet's most popular sites, has been blocked in mainland China for the past four days.

Google Sites and Blogger also have been blocked, while other Google properties like photo site Picasa and Google Docs have been partially blocked, according to the page.

Web search and Google Images, which like other services now originate from Google servers in Hong Kong, were reporting no blockage on the page.

The YouTube downtime created much online buzz early Thursday. The term "Service Unavailable" became a trending topic, and many blogs were speculating on a possible China connection.

The outage came a day after Wikipedia, the user-created online encyclopedia, was down for several hours.