Hubble and the space shuttle in IMAX 3-D 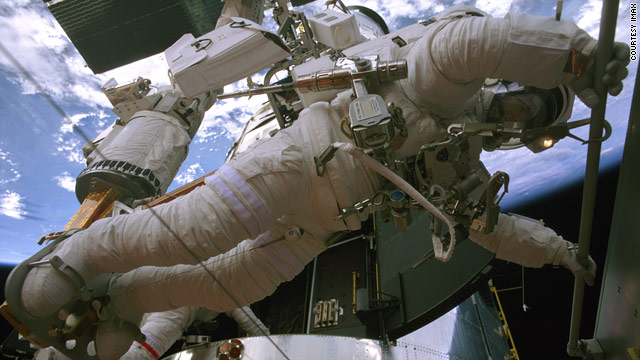 Astronaut Andrew Feustel moves equipment that will be used to fix the Hubble telescope in a scene from "Hubble 3D."
STORY HIGHLIGHTS

(CNN) -- There's one word astronaut Michael Massimino uses over and over to describe the view from the Hubble Space Telescope: "Beautiful."

"I tell folks ... if you're in heaven, this is what you would see," said Massimino, a space walker on a repair mission to Hubble. "This is what heaven must look like. It's beautiful."

Today, when "Hubble 3D" begins showing in IMAX theaters, he says, moviegoers will get the best look ever at what he's seen.

The movie -- a joint project of Warner Bros., NASA and IMAX 3D -- chronicles the last-ever mission to Hubble in May, when seven NASA astronauts journeyed via space shuttle Atlantis to install more powerful equipment on the orbiting observatory.

Narrated by actor Leonardo DiCaprio and using the 3-D technology that has become increasingly popular in mainstream movies, the film showcases the nearly 13-day mission in ways never before possible, said the film's director.

"I think there is a kind of innate curiosity in all of us and a thirst to travel to places that either we can't go to or it's extremely difficult to do so," said Toni Myers, whose credits include a 3-D documentary about the international space station.

"It's a sense of adventure anybody has, even if they want to indulge it from the safety of a cinema seat," she said. "I think what I like about the combined technology is that it really does allow you and me, who aren't astronauts, to travel to orbit and be there."

The movie is being released Friday in IMAX theaters, with other theaters being added April 23, the 20th anniversary of Hubble's launch.

A March 9 premiere was held at the National Air and Space Museum in Washington.

The Hubble telescope was launched in 1990 to orbit the Earth while peering into the farthest reaches of the universe. The telescope has been enhanced over the years with new technology as well as fixes for high-profile problems like a faulty mirror that made Hubble's earliest images less than impressive.

Astronauts fixed two instruments, repaired two others, replaced batteries and installed insulation to keep Hubble running until at least 2014, when the James Webb Space Telescope will be launched.

Moviegoers will see 3-D images of those spacewalks, as well as three-dimensional shots of the shuttle's takeoff and landing. They'll also see photos Hubble has taken -- including images of distant galaxies, colorful gas and dust clouds, and the remnants of supernovas -- and witness the political debate over whether it was worth sending the shuttle to Hubble at all.

Massimino, a veteran of two space walks, joked that the astronauts aboard the Atlantis were nervous about their filmmaking duties.

"We're basically a bunch of knuckleheads," said Massimino, a graduate of Columbia University with a doctorate from MIT. "Just because you can walk in space and fly a space shuttle doesn't mean you'll remember to turn a camera on and off."

But Myers said astronauts are particularly well-suited for receiving movie directions, even when they're coming from about 350 miles below their orbiting stage.

"They're the best learners in the world, or they wouldn't be astronauts," she said. "It's a pleasure to teach them anything. They're very quick studies."

Myers said that working with astronauts on her films has another big plus: Like actors, they're used to rehearsals and scripts.

"Each space walk is heavily scripted," she said. "There are action-by-action time tags scripted. They do it relentlessly, over and over again, until it's totally by rote."

That helped her with a big challenge of the project: Although there's 3-D footage of the shuttle's takeoff and landing, the jam-packed mission had enough room to carry only eight minutes of 3-D film (Regular high-definition cameras caught other action).

Even that little bit required a mile of film, Myers said. She gave astronauts specific instructions on which moments of their scripted routines she wanted shot in 3-D.

"If a guy starts to do what you think he's going to do but then says, 'Wait a minute, I forgot this or that,' that was the greatest fear," she said.

Massimino and Myers said the Hubble repair mission had more than its share of drama, from the political fight over whether it should be funded in the first place to the fact that there will never be another like it.

"On a space station flight, if something doesn't get done on a spacewalk, hopefully there's something that can be made up by another flight coming up or the crew on the station," Massimino said. "On Hubble, there ain't gonna be another crew."

But in the end, he said, just letting other people see the universe as he's seen it is the movie's highlight.

"The only sad part of it is, you get to go with six of your friends, but you don't get to go with your other family members and friends," he said. "You say, 'Gosh, I wish I could have my wife and friends here and my family and everyone else.'

"For me, this was about sharing the experience."