10 new iPhone games for everyone 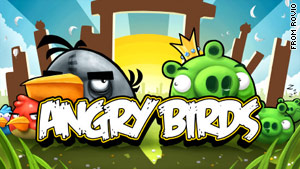 In "Angry Birds," a game for the iPhone, players take part in a bizarre battle between birds and pigs.
STORY HIGHLIGHTS

(CNN) -- Reports from this week's Game Developers Conference make one thing clear: Games on mobile phones are not just a niche category anymore.

They're becoming a centerpiece of the video game industry, and they're trying to appeal to wider demographics than teenage boys: today's diverse slate of mobile phone games include men, women and younger children.

While the video gaming world is sometimes thought to be dominated by men, some studies show social games in particular are gaining traction with women.

In honor of the this gamer diversity, and because of the GDC in San Francisco, we decided to list 10 of our favorite new iPhone games. We categorized the gaming apps according to which groups of people may find them most interesting.

Feel free to let us know what we missed. Post your opinions in the comments section.

Do you miss the Vancouver Olympics? The "X2 Snowboarding" app may make your transition back to reality TV more palatable.

Steer a cast of snowboarders through downhill courses, doing tricks along the way to earn points and unlock new levels. 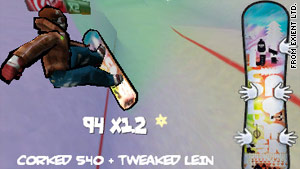 Pro: Realistic graphics make you feel like you're on the mountain. Intuitive controls let you tilt your phone from side to side to turn.

Con: Maybe halfpipe gold medalist Shaun White could get the characters in this app to throw multiple flips and spins, but it takes practice for others. Multiple controls for spins and grabs make earning big points tricky.

Get some revenge on those birds that wake you up in the morning with this cartoonish app, called "Angry Birds." Players launch birds with a slingshot into towers of pigs, trying to knock the swine onto the ground.

According to the storyline, the bizarre birds-versus-pigs undertones for this game come from the fact that the pigs in the game stole the angry birds' eggs, prompting a quest for revenge.

Pro: Adults never get to play with slingshots, and hurting birds in real life will get you in trouble -- and it's just plain wrong.

Con: The game has limited variation.

What popular new game combines space travel with farming? That would be "Astro Ranch," which blasts you off to another planet to raise alien crops and critters.

Pro: Gameplay begins with an amusing little intro that explains how you crash-landed on the planet, introduces you to the local "mayor" and gets you started.

Con: The game can be confusing, and its ultimate goal -- be a great space farmer! -- seems a little vague.

"Chore Hero," if it works, is every parent or spouse's dream: It aims to make doing household chores fun.

Players assign tasks to each other and rank the items by difficulty. You earn points and rewards for completing the chores, making doing the laundry and scrubbing the toilet a sort of bizarre, domestic competition. 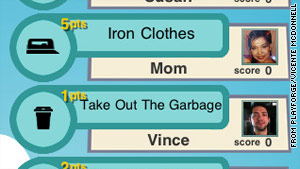 Pro: Are you the sibling who always gets assigned too much work around the house? A workload page on the app gives you a quantifiable way to gripe about it with mom and dad.

Con: I mean, come on. I still don't want to do the dishes.

Become a saucy trailer-park denizen pulling out an arsenal of big guns to fight off an alien invasion in "Daisy Mae's Alien Buffet." You can taunt the aliens for bonus damage and unlock new costumes and weapons in this dual-stick shooter.

Pro: Silly, B-movie inspired fun. Lots of different aliens to kill and lots of artillery to kill them with.

Con: A game featuring a woman who fights aliens while wearing Daisy Duke shorts isn't for everybody. Some crude humor and "suggestive themes."

"Plants vs. Zombies," a hilarious twist on the tower defense-style game, lets you deploy an arsenal of animated plants to fend off a hungry zombie horde. The game brought in more than $1 million in less than 10 days after its February 15 release.

Pro: Polished, fun and colorful -- with great music. Reviewers say they would have paid much more than its $2.99 price tag.

Con: Some users have reported some minor slowdown on higher levels. Otherwise, if you think of something negative about killing zombies with a sunflower, let us know.

Want to stump your smarty-pants friends? "The Moron Test" is a series of seemingly simple tasks -- push a red button three times, choose the largest of several ducks, etc. -- filled with tricky pitfalls.

Pro: It's almost impossible to make it all the way through the 100 levels without getting a "FAIL!" message, which is great incentive to try again.

Con: Fail too many times and you have to start from the beginning. 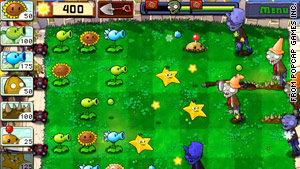 "Plants vs. Zombies" is a fun title, especially for plant-lovers.

"Monkey Preschool Lunchbox" in one of a slate of iPhone apps that's designed for young children. This particular game aims to help kids learn to spell, read and count. A cartoon monkey guides them through various games, and when they finish a level, they get a digital sticker to put on a board.

Con: Tropical background music, monkey chirping and goofy voices in the game mean you'll want to get your kids some headphones to avoid going bonkers.

The breathlessly titled "Cupcakes!" lets you bake, decorate and "eat" colorful virtual cupcakes with an almost-endless variety of cake mixes, frostings and toppings. From the maker of Pizza!

Pro: You can display your finished confections in your photo album or e-mail them to a friend.

Con: They'll make you hungry for the real thing.

"The Price is Right 2010" faithfully replicates the experience of being on the classic TV game show, complete with a variety of guess-the-price challenges, theme music and audience applause.

Pro: You get to play in the Bob Barker Studios and hear the announcer say, "Come on down!"