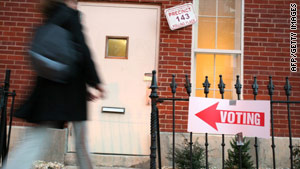 (CNN) -- Just over a quarter of all American adults used cell phones to participate in some election-related activity during last month's elections, according to a new report from the Pew Internet and American Life Project.

This activity surrounding the November 2 elections was not just a smartphone phenomenon. Most people used mobile tools that are available even on the inexpensive "feature phones" that operate on basic wireless (not 3G) networks, and which the vast majority of Americans still rely on.

• 14% of all American adults used their cell phones to tell others that they had voted. (This could involve both voice calls and text messages, as well as social media and e-mail.)

• 12% used mobile phones to keep up with news about the election or politics. (This could involve the mobile Web, e-mail, social media, or text messages.)

• 10% sent text messages about the election to friends and others.

• 6% used their cells to let others know about conditions at their local voting stations on Election Day, including insights about delays, long lines, low turnout, or other issues.

• 4% used their phones to monitor results of the election as they occurred.

• 3% used their cells to shoot and share photos or videos related to the election.

• 1% contributed money by text message to a candidate or group connected to the election like a party or interest group.

Only 1% of U.S. adults reported using an election-related smartphone app that provided updates from candidates, parties, or groups.

Pew's survey showed this mobile election-related activity was split pretty evenly between the major parties, and those aged 18-29 were especially likely to use their phones in this way. Slightly more men than women are "mobile political users," and non-Hispanic black Americans were more likely than white or Hispanic Americans.

The Tea Party movement has been relying heavily on digital media (including mobile channels) to organize and motivate supporters and influence voters.

Using your mobile phones to learn about election politics doesn't mean you'll necessarily vote -- but it does appear to help voter turnout. The report noted: "Somewhat surprisingly, 21% of those who used their cell phones to learn about or participate in politics did not end up voting in the election. Some 35% of those in the survey said they did not vote, so the wireless political cohort went to the polls in greater numbers than the general population."