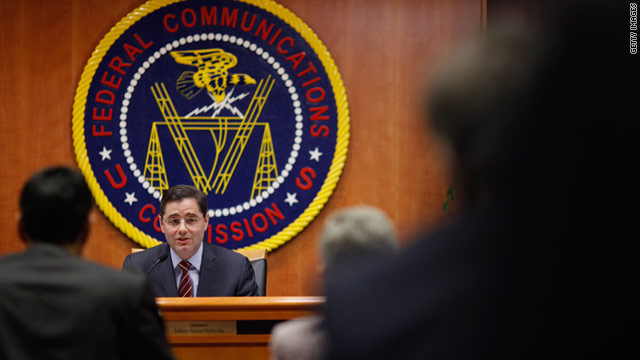 (CNN) -- This week, FCC Commissioners voted 3-2 to approve controversial "net neutrality" rules -- the exact content of which it has been rolling out slowly throughout the week.

The agency started by releasing two-and-a half pages of "snippets" from the final rules on Wednesday -- which basically just repeated what FCC officials had already revealed earlier about the rules.

Judging by the initial proposed draft, the completed final rules are likely to run at least 100 pages. And the devil is always in the details, especially for government regulations.

While we're waiting out the "several days" that FCC officials said it will take to "address any dissenting views from the commissioners in the order" before the final Open Internet Order is published for all to see, the FCC commissioners have released individual statements about the proceedings.

Reportedly, the new net neutrality rules will mostly not apply to mobile devices (such as cell phones or tablets) that connect to the internet via wireless carriers. Since most internet access is expected to shift to mobile devices over the net couple of years, this is a huge concern for all internet users.

So what did the FCC commissioners have to say about mobile and net neutrality? Here are a few highlights from their statements.

In his statement affirming the FCC decision, FCC Chair Julius Genachowski said: "The principle of Internet Openness applies to mobile broadband. There is one Internet, and it must remain an open platform, however consumers and innovators access it."

That's a little confusing, since (so far as the FCC has indicated) wireless carriers are exempted from some significant net neutrality requirements in the final order.

For instance, while "wired" (or "fixed) providers are prohibited from charging consumers or online content/service providers simply for allowing access or delivering traffic, wireless carriers appear to face no such constraint. That leaves the door open for wireless carriers to start doing things like charging extra for mobile access to specific services or sites (such as Facebook) -- which, according to Wired.com, they're already mulling.

"Our order makes clear that we are not endorsing or approving practices that the order doesn't prohibit," Genachowski said, "particularly conduct that is barred for fixed broadband."

FCC Commissioner Michael J. Copps went along with the majority to approve the order -- but he voiced some serious reservations, especially about mobile.

"I argued for real parity between [wireline and wireless] technologies. After all, the internet is the internet, no matter how you access it, and the millions of citizens going mobile nowadays for their internet and the entrepreneurs creating innovative wireless content, applications and services should have the same freedoms and protections as those in the wired context," said Copps.

Copps noted some important work the FCC still has left to do to protect mobile consumers: "We have much urgent business to address to ensure a truly competitive mobile broadband environment -- including resolving the pending proceedings related to early termination fees (ETFs), handset exclusivity arrangements, interoperability in the 700 MHz band, and data roaming." (More about data roaming and the FCC.)

Similarly, Commissioner Mignon L. Clyburn approved the order while voicing serious concerns, especially regarding equal access to the internet regardless of race or other demographic factors.

"First, I would have extended all of the fixed rules to mobile, so that those consumers who heavily or exclusively rely upon mobile broadband would be fully protected. There is evidence in our record that some communities, namely African American and Hispanic, use and rely upon mobile internet access much more than other socio-economic groups."

Clyburn also noted that under this order the FCC will monitor the mobile broadband marketplace. "[The Commission intends] to create an Open Internet Advisory Committee, [which will] assess and report to the Commission new developments and concerns in the mobile broadband industry." It will be interesting to see which investigative, reporting, or enforcement powers this committee might have -- or lack.

The two commissioners who dissented (Robert M. McDowell and Meredith Attwell Baker, both Republicans) generally echoed the arguments that the major wireless carriers have been making against any net neutrality regulation.

For example, McDowell wrote in a statement that mainly blasted the legal underpinnings of the new rules: "My dissent is based on four primary concerns: (1) Nothing is broken in the Internet access market that needs fixing. (2) The FCC does not have the legal authority to issue these rules. (3) The proposed rules are likely to cause irreparable harm. (4) Existing law and Internet governance structures provide ample consumer protection in the event a systemic market failure occurs."

Such sharp critiques by the dissenters did not seem to quell Chairman Genachowski's enthusiasm for the new rules. "I am proud of this process, which has been one of the most transparent in FCC history," he noted.

From this I surmise that, at the FCC, the definition of "transparency" apparently excludes the crucial final stages of how policy "sausage" gets made.

Telecom analyst Peter Pratt, who's been using the Freedom of Information Act to (so far unsuccessfully) obtain the final rules from FCC, expressed a different view in his blog Stimulating Broadband yesterday.

"This order is the single most important regulatory document in US telecom policy since at least the passage of the 1996 federal Telecom Act. ...The American people have a right to see all of the various drafts of the Order. We deserve to understand ...how lobbyists and partisan Commissioners changed the working draft over the past three weeks. That is what full transparency means," said Pratt

According to Pratt, "What we have instead is a controlled view of what the order says. ...The fact that so much national debate has raged over a document that the American public has not seen to date is surely to remain prominent in the commentary."