Report: One-third of US youth have smartphones 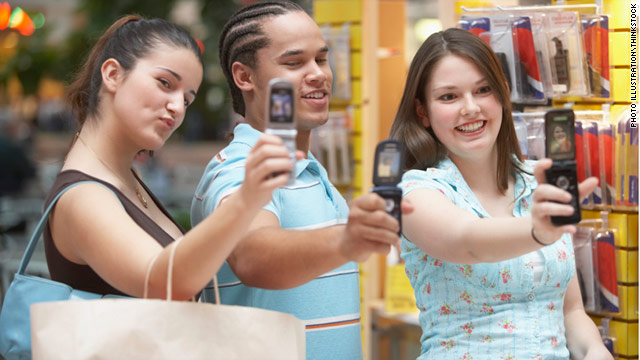 (CNN) -- Young people around the world love their cell phones -- and a new Nielsen report sheds light on which phones they're using, how they choose their phones, and how they use them.

The report focused on youth ages 15-24 from Brazil, Russia, India, China, Vietnam, Germany, Spain, Italy, the UK and the U.S.

In all countries studied, the majority of young mobile users own feature phones (basic phones that don't run apps) -- which isn't surprising, since they indicated that price is the main driver in their purchase decision (except for Russia, where design was ranked as slightly more important).

In the U.S., only 33% of young mobile users have smartphones. Italy had the highest smartphone penetration among youth (47%), and India had the lowest (10%). One surprise: Most young U.S. smartphone users (55%) are female. In every other country studied, most young smartphone users are male.

But in terms of mobile Web usage, Chinese youth are leading the way: 73% of young Chinese mobile users access the Web from their phone. Young American mobile users, while in second place, are far behind -- only 48% report using the mobile Web.

The report took a special look at U.S. teen texting. "If it seems like American teens [ages 13-17] are texting all the time, it's probably because on average they're sending or receiving 3,339 texts a month. That's more than six per hour they're awake -- an 8% jump from last year," said the report.

Teen girls are doing most of that texting, the report said -- they send and receive an average of 4,050 texts per month.

Who pays for young people's cell phones? This varies by age. In the U.S., only 27% of mobile users aged 15-19 pay for their own service; in Germany and Brazil, that figure is 56%. But once German and Brazilian mobile users reach the 20-24 age group, those numbers jump to 84% and 82%, respectively.

For U.S. mobile users aged 20-24, 45% are paying their own mobile phone bills. Which is a bit surprising: Are most U.S. families really willing to foot the mobile bill for a 24-year-old?

How do young people pay for their phones? In Russia, a whopping 98% of young mobile users have prepaid phone plans; in the U.S., only 19% do. However, prepaid plans are more common and diverse in most countries outside the U.S.; so this might not be solely an age-related issue.