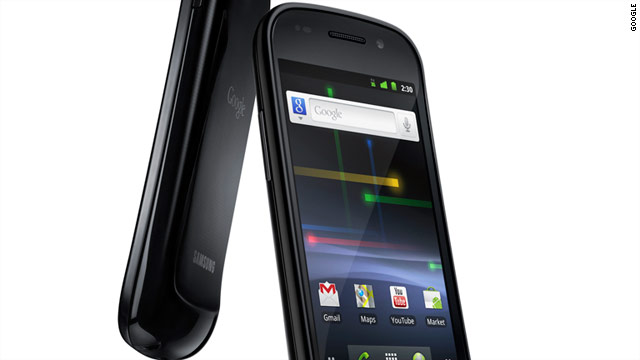 The Nexus S from Google and Samsung has a curved screen and will cost $199 with a two-year contract with T-Mobile.
STORY HIGHLIGHTS
RELATED TOPICS

(CNN) -- Google announced a curvy new smartphone on Monday -- the first gadget to run the newest version of the Android mobile operating system.

Google teamed up with Samsung Electronics to make the Nexus S. It is powered by Android 2.3., which could enable it to be used as a phone and credit card.

The device sports an unusual "contour display" -- a bright 4-inch screen featuring curved glass. This helps cut down on glare from direct sunlight, and the light, thin glass reduces heft, Google says. "It's subtle, but you'll notice," the company wrote in its marketing materials.

Best Buy will begin selling the phone in its U.S. stores on December 16 for $199 with a two-year T-Mobile contract. Best Buy stores in the UK will start carrying the product on December 20, along with Carphone Warehouse.

The Nexus S will also be available online with a T-Mobile subscription or unlocked, meaning it can operate on AT&T and many other carriers worldwide, Google said. No price has been set for the unlocked version, but Google's first (and now-discontinued) phone, the Nexus One, sold for $529.

Some other hardware features put the Nexus S in line with recent high-end smartphones. It has a fast processor and two cameras -- a 5-megapixel camera on the back for taking photos of other people, and another on the front for video conferencing.

The existence of the Nexus S before Monday's announcement had been well documented by gadget blogs.

At an onstage appearance last month at the Web 2.0 Summit in San Francisco, Google CEO Eric Schmidt eagerly gave his own demonstration of the Nexus S, pulling what he called "an unannounced device" from his pocket.

One thing Schmidt highlighted then is the inclusion of a technology called Near Field Communication (NFC). Similar to the chips in many new credit cards, an NFC-equipped phone, like the Nexus S, lets you tap the gadget against, say, a poster to connect with the internet for more information, or against a payment terminal at check-out.

"One way to think about it is this could replace your credit card," Schmidt said.

Android 2.3, more commonly known as Gingerbread, integrates NFC into the software so that other smartphone makers besides Samsung can integrate it into new products. Gingerbread also introduces aesthetic changes to Android, as well as tweaks to the copy-paste functions and to applications like YouTube.

Finally, Gingerbread integrates with Voice-over IP to easily make calls through a data connection, rather than using your cellular plan's voice minutes. Google integrated a similar function into the Gmail website.

Those looking to upgrade their current Android handsets to Gingerbread will have to wait (save for the enterprising bunch willing to hack their devices). Google said it will distribute the source code of the software "in the coming weeks," which is when phone makers like HTC and Motorola will be able to make their necessary alterations.

As for the Nexus S, Google appears to have learned a few lessons from its previous venture into selling phones.

The Nexus One -- as part of a partnership with HTC -- was released in January, and the product launch, while a critically acclaimed phone, was widely seen as a flop.

The phone was sold exclusively through a Google online store and was promoted as an unlocked handset. Unlocked phones, as it turns out, are seen as very expensive by consumers who don't seem to mind two-year contracts if it means saving $350 up front. Google quickly shuttered its Web store.

Google, whose CEO is steadfast in saying, "We don't make devices," is no doubt hoping its marriage with Samsung fares better in the market than its previous fling with HTC.