Wireless carriers join forces on mobile tap-to-pay -- but will it fly? 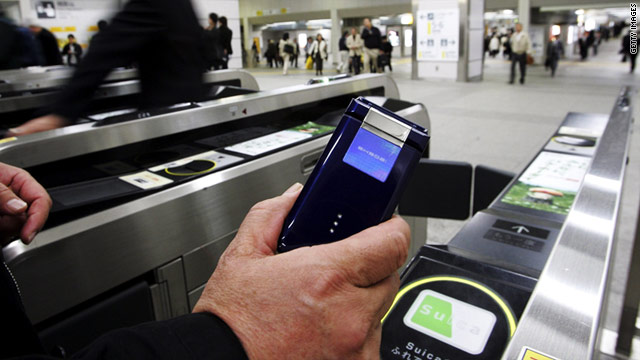 (CNN) -- Would you be willing to pay for a pair of jeans, a tank of gas or a movie ticket simply by tapping your cell phone against a terminal?

Three major U.S. wireless carriers -- Verizon, AT&T, and T-Mobile -- are betting you're willing to make this shift. They want your cell phone to become your wallet. Instead of a credit card, you'd use it to buy things in retail stores.

Even though they're competitors, these wireless service providers recently joined forces to launch Isis -- a mobile payments system that aims to rival both conventional credit and debit cards as well as alternative payment services like PayPal. However, for Isis to succeed in the United States, it must overcome entrenched habits, assumptions and infrastructure issues -- both for consumers and merchants.

Isis relies on near-field communication technology, which is being integrated into lots of Android, iPhone, Nokia, and Blackberry phones. According to NetworkWorld, "Juniper Research forecasts that one in every six mobile users worldwide will have an NFC-enabled phone by 2014."

How do near-field communication mobile payments work? Here's a video demonstration. (Note: This is not the Isis system, but rather Mastercard's Paypass system, which has been around for a few years in some regions.)

UPDATE: The original version of this story incorrectly stated that Isis purchases appear on phone bills; they actually show up on a customer's credit card or bank statement.

Isis payments will be available to Verizon, AT&T, and T-Mobile customers who have mobile-payment-enabled phones and who shop in stores equipped with Isis checkout terminals. The carriers, however, have not revealed how much you'll be able to purchase via Isis, which stores will offer Isis checkout or what kinds of interest charges and fees might apply.

These are crucial questions. According to Internet Retailer, "The long-standing barrier blocking wireless providers from launching mobile payments has always been credit. A carrier might feel comfortable letting a consumer buy a cheap digital download like a ring tone or a game and charging it to a phone bill, but they are leery of extending big lines of credit."

In order for a system like Isis to take off, it has to be a good deal for merchants as well as consumers. Participating merchants will undoubtedly have to pay to outfit their checkout counters with Isis terminals. Plus, as Aaron McPherson of Financial Insights recently told Digital Transactions, merchant fees for Isis transactions "really must be a jaw-dropping deal."

Aside from Isis, lots of companies want to help bring mobile payments, to your phone.

Last week, for example, Visa's head of global mobile, Bill Gadja, blogged about how Visa is experimenting with and preparing for mobile payments. And at the recent Web 2.0 Summit in San Francisco, Google CEO Eric Schmidt touted how the next version of the Android mobile operating system (2.3 "Gingerbread," which is due out soon) will support mobile payments. AT&T and Boku also have started a joint mobile payment trial that works with some online retailers (but not brick-and-mortar stores).

What about Paypal? In July, VentureBeat reported that Paypal launched a mobile version of its Express Checkout service -- but the Paypal site doesn't mention it, so it's unclear whether this system is available to consumers in physical retail locations.

Paypal is in a pretty tricky position on mobile payments because a large portion of its fast-growing business depends on interacting with traditional credit card companies. The New York Times noted this point:

"Credit card companies that have partnered with PayPal may be its biggest rivals in the new mobile payments space. PayPal is an important customer because every day it facilitates millions of credit card transactions. But PayPal also threatens credit card companies by giving users the option to pay for their online purchases directly from their bank accounts."

In the next year, consumers will undoubtedly hear lots of mobile payment hype from wireless carriers, credit card companies, and other service providers. But while mobile payments are commonplace in Japan, South Korea, and parts of Europe, there's reason to be skeptical that they'll soon be commonplace in the United States.

Last week, after the Isis announcement, mobile payments analyst Bob Egan told Computerworld that widespread U.S. adoption could take decades -- especially since using credit or debit cards is such an ingrained consumer habit. "Can I trust my carrier to get the billing right? Can I trust that no one will be able to scam my account or steal my identity? All those questions need to be addressed," he said.

Mobile payments might stand a better chance if they're combined with automatic discounts or special deals -- like those you get with your supermarket discount card -- or if they're offered as a debit option by banks. Recently, American Banker reported that while Americans ages 18 to 34 often have phones that can make mobile payments, they also tend to prefer to use debit cards as a way to manage their budget.

Also, security issues need to be made crystal clear to consumers. Could someone pick your mobile pocket just by standing near you or bumping into you with a mobile terminal?

Finally, given how confusing and cryptic most cell phone bills are, will U.S. consumers really be willing to make those bills even more complex?

Mobile charitable donations enabled through SMS text messaging services such as MGive are getting popular, and those transactions do show up on consumers' phone bills. However, people are likely to make donations far less often than they purchase than consumer goods or services. Seeing a $10 donation to your local public radio station is one thing -- but do you really want to see 15 lattes on your phone bill?