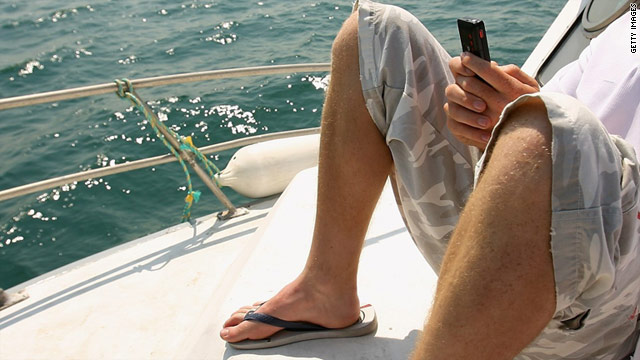 Using your phone to surf the Web outside your wireless carrier's network coverage area can result in a nasty bill surprise.
STORY HIGHLIGHTS
RELATED TOPICS

(CNN) -- If you use mobile data services outside your wireless carrier's network coverage area, you could get a nasty surprise in your bill.

Data-roaming charges can be outrageously expensive, even totaling thousands of dollars in a single month. Also, carriers often don't make it obvious to phone users when and where data-roaming fees might apply, or how fast they can add up.

But that could be changing. At its December open meeting, the Federal Communications Commission may vote on a proposed rule that would mandate automatic data-roaming agreements between carriers and address consumer worries by requiring reasonable prices for this service.

In April, the FCC ordered all wireless carriers to automatically allow voice calls to roam across networks. The data-roaming proposal would do the same for data traffic, i.e. mobile Web surfing, running apps and other actions.

The stakes here are much higher than just data-roaming charges. Network neutrality -- the contentious principle that broadband providers should maintain equal Web access to all and not offer favorable delivery speeds to certain clients -- may be at stake with this vote.

Recently, Politico's Kim Hart explained: "The debate is the latest skirmish in the larger battle over broadband reclassification. To impose the rule, the FCC would need to change the legal framework that governs broadband services -- an idea pushed by net neutrality advocates but vehemently opposed by many Republicans and internet providers. ... Enacting a data-roaming rule would be politically expedient for FCC Chairman Julius Genachowski, who has faced legal setbacks in his quest to make wireless networks more open."

The two largest U.S. carriers -- Verizon and AT&T, which together serve over 60 percent of U.S. mobile subscribers -- strenuously oppose this move. These carriers claim they already have negotiated dozens of data-roaming agreements with smaller carriers.

According to Fierce Wireless, "The arguments by the nation's largest operators stand in stark contrast to filings by smaller wireless carriers, which argue the FCC should mandate automatic data roaming as it has already done with voice calling -- an effort intended to give smaller carriers a chance to compete against larger operators."

The carriers also have a more fundamental objection to the proposed data-roaming rule: They claim the FCC does not have the authority to regulate the data side of their business.

Taking the carriers' side against the FCC in this fight are some powerful politicians -- most notably Florida congressman Cliff Stearns, the ranking Republican on the House Communications, Technology and the Internet Subcommittee. Stearns may take over leadership of the powerful House Energy and Commerce Committee when Republicans gain control of the House in 2011.

Earlier this month, when rumors began circulating that the FCC might move to vote on data roaming, Stearns issued a a statement opposing the vote.

"Ramming through internet regulations would ignore the will of a bipartisan majority of Congress and the American public," he said. "It would further impede economic growth and job creation."

The FCC sidestepped this vote in the agenda for its November 30 open meeting. Without explanation, the agency last week announced it will delay its December meeting by a few days, until December 21.

The agenda for the December FCC open meeting has not yet been published. If a vote on the data-roaming proposal appears on that agenda, the FCC might be able to get this rule approved under the wire, increasing its ability to pursue its net neutrality plans, before a more hostile Congress moves in.