Shooting video at a TSA checkpoint? Here's what you should know 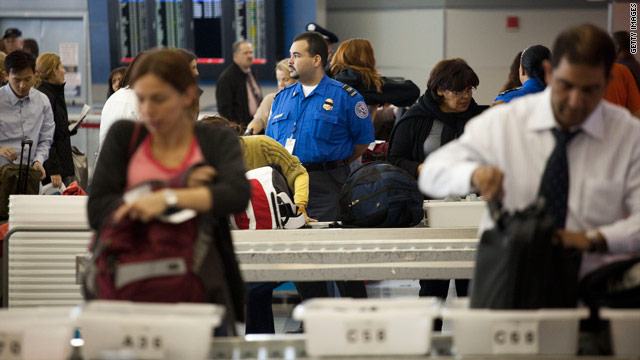 As Americans fly to and from holiday gatherings, some travelers may try to video their TSA encounters.
STORY HIGHLIGHTS
RELATED TOPICS

Tyner is the man who told a TSA agent not to touch his "junk" while he refused a pat-down search November 13 at a San Diego, California, airport.

As Americans fly to and from holiday gatherings this season, some travelers -- anxious about their rights at airport security checkpoints -- may try to follow Tyner's lead and video their TSA encounters.

Is that legal? It depends.

TSA says on its blog: "If you are taking pictures at or near the checkpoint, don't be surprised if someone (TSA, airport police, or a curious passenger) asks you what you're up to. We don't prohibit public, passengers or press from photographing, videotaping, or filming at screening locations. You can take pictures at our checkpoints as long as you're not interfering with the screening process or slowing things down.

"We also ask that you do not film or take pictures of our monitors. However, while the TSA does not prohibit photographs at screening locations, local laws, state statutes, or local ordinances might. Your best bet is to call ahead and see what that specific airport's policy is."

Wednesday on NetworkWorld.com, "Ms. Smith," the site's privacy and security blogger, wrote about what you can do if threatened with arrest when recording video at TSA checkpoints.

Smith advises: "If you are flying and decide to turn on your phone to take video of TSA checkpoints, that is legal as long as you do not film the TSA's monitors, or interfere with or slow down the screening process. However, if you do videotape TSA checkpoints, then you should have the TSA public affairs (TSA's Office of Strategic Communications) number plugged into your phone: 571-227-2829.

"Another important phone number to have with you is the TSA's Office of Civil Rights at 571-227-1917. It all depends where you are and if the police or TSA agents know the law."

Smith also recaps several recent incidents where travelers were threatened with arrest or had their phones or cameras confiscated by police or airport security for attempting to take photos or video at TSA checkpoints.

If you do decide to shoot video with your phone of the TSA, police, or other security officials in action, it helps to keep in mind that the secret of good video is good audio. So keep talking.

Tyner's 12-minute video of his TSA encounter certainly isn't much to look at -- most of the time the camera is pointing at the ceiling or at people's feet or waists. Tyner did not shove his phone's camera in the faces of the officers who were questioning and detaining him.

He managed to confront them clearly, and convey his concern and outrage, through talking -- rather than the more confrontational body language that pointing a camera at someone's face implies. This can help control tension in a stressful encounter.

What made Tyner's video so popular is that you can hear pretty clearly what the people involved in the encounter were saying and the tone of their interactions. The microphone on Tyner's phone captured sufficiently good audio to get the point across. Not all cell phones have good microphones, so make sure you record some test video -- in advance, probably before you get involved in a security confrontation -- so you know what to do. (More tips for cell phone audio recording.)

So if you're shooting video of a security encounter, keep talking; keep asking questions -- especially clarifying ones like "What are you doing?" rather than rhetorical ones like "Ever hear of the U.S. Constitution?"; let people answer you -- don't interrupt them or shout over them; and generally collect as much audio information as possible.

Note that Tyner apparently did not inform the TSA officials that he was recording the encounter, which may also be why he didn't point the phone at them. Recording police or security officers can be a legal gray area.

As Glenn Harlan Reynolds explained in "Popular Mechanics" earlier this year, taking photos is public places is not a crime. However, as Wendy McElroy explained in the blog, "The Freeman," 12 states currently have laws requiring that "all parties must consent for a recording to be legal -- unless, as with TV news crews, it is obvious to all that recording is underway."

Three of these states have taken this recording restriction a step further. According to McElroy, Illinois, Maryland and Massachusetts have specifically made it "illegal to record an on-duty police officer even if the encounter involves you and may be necessary to your defense, and even if the recording is on a public street where no expectation of privacy exists."

It's unclear whether this law also applies to other security officers such as TSA, transit police, or campus security.

Recording security or police officers in action definitely is not risk-free. Knowing your rights, the law in that state, location-specific policies like airport rules, your equipment, and recording technique basics can help you make the best decisions in these situations.