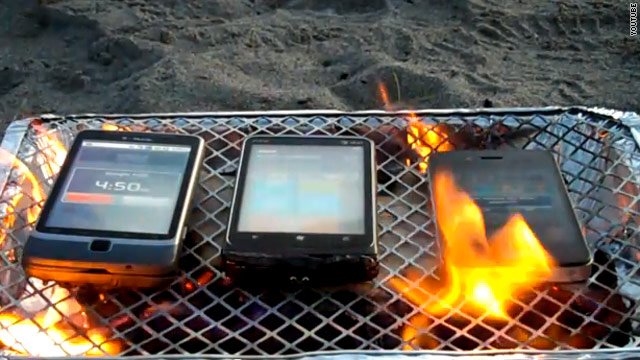 (Mashable) -- Have you ever wondered which smartphone would last the longest when cooked like a hamburger? Us too.

This neat little video of an iPhone 4, an Android G2 and a HTC Surround getting seared and charred has been making the viral video rounds.

Each of the phones delivers digital smack talk ("How do you like them apples?!") before the searing heat puts them out of their misery.

The video is apparently designed to promote the EZGrill disposable grill. They got some help though from Seattle-based Banyan Branch. Not bad for the cost of three phones and a grill.

In case you were wondering, the Android was the first to go, while the iPhone's temperature protection feature kicked in right on schedule.

That makes the Windows Phone 7 the most fire-resistant of the bunch.

Check out the video to see the full BBQ action.