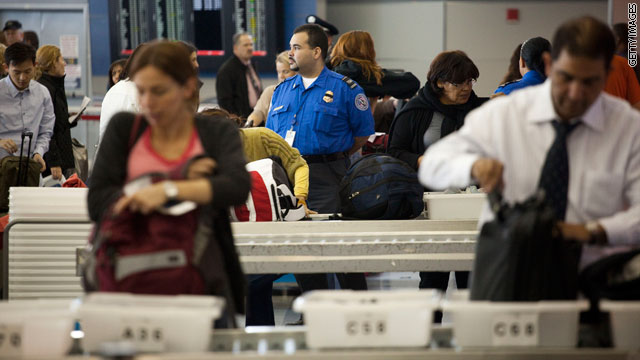 (CNN) -- Perhaps Apple should have called its new laptop the MacBook Airport.

Frequent travelers may appreciate the convenience of the 11-inch MacBook Air, which can remain in a passenger's bag when going through airport security, a Transportation Security Administration spokesman told CNN.

As gadget-toting flyers know, TSA officials require that laptops and larger electronics, such as Xbox or Wii game systems, be removed from luggage and passed through X-ray machines separately.

Security-checkpoint employees are trained to identify what basic electronic gadgets' innards are supposed to look like in an X-ray image. For larger hardware, the TSA requires a clear shot to make inspecting the complex parts inside easier.

Apple may wish to avoid comparisons of the MacBook Air to similarly compact but underpowered netbooks. However, like netbooks, Apple's new laptop is "smaller than a standard-size laptop," meaning it can stay in a bag, said TSA spokesman Nicholas Kimball.

The rules on whether the larger, 13-inch MacBook Air -- thinner than most laptops because it doesn't have a DVD or hard drive -- would need to be placed on the conveyor belt separately have not been established, Kimball said. Many computer makers, including Apple, make full-blown 13-inch laptops that do need to be X-rayed separately.

"If someone has a lot of stuff in their bag, it's sometimes difficult to get a clear view of it," Kimball said. "It might need additional screening."

The few seconds saved at security could be a selling point, especially for jet-setting businesspeople.

Some iPad owners expressed surprise and delight when they discovered that their tablet didn't need special attention from TSA workers. E-readers, like the Kindle and Nook, can stay in baggage, too.

But airlines still forbid cracking open an e-book during takeoff and landing, no matter how small the gadget is.