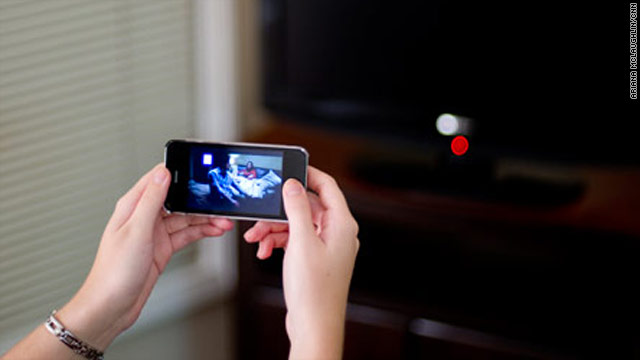 Fifteen percent of 18- to 30-year-old Americans use their phones to watch videos or TV, according to Forrester Research.
STORY HIGHLIGHTS

(CNN) -- Matthew Callahan's laptop is sitting in its case, which is most likely where it will stay for the next nine months he's on the road.

An actor in a touring production of "Legally Blonde The Musical," Callahan relies on his smartphone, an iPhone 4, to keep him connected to the outside world while he's on tour.

"It literally makes life on the bus completely fine," said the performer, who last toured in 2006 -- pre-smartphone.

"That was kind of a nightmare," he said. "I caught up on a lot of reading, but that's about all I could do. My laptop was a 15-inch monster that didn't fit very well on a bus. My seatmate wasn't happy."

Thanks to his travels, Callahan realized his smartphone could double as a computer and TV. His Slingbox app allows him to watch Jets games from the comfort of his dressing room.

Thursday: More users are ditching their desktops or TVs for the ease of basic computing on phones

He's one of many people to make that connection. More and more smartphone users are leaving their desktops, laptops and even their TVs in the dark, and looking to mobile devices to satisfy all their basic technological needs.

A September study conducted by Forrester Research found that 37 percent of 18- to 30-year-old Americans access the internet with their mobile phones and 15 percent use their phones to watch videos or TV.

"Mobile data traffic is up 5,000 percent over a 3-year period," said Dawn Benton, the director of corporate communications at AT&T. That growth is a perfect example of the fact that more people are choosing to use smartphones and "emerging devices," like tablets and notebooks, she added.

"Our goal is to mobilize everything to improve customers' lives," Benton said. "Devices are becoming smaller and more portable, and that's driven by what consumers want them for."

For most users, it's all about the convenience of having everything you need in the palm of your hand.

"It's easier reaching in your pocket than powering up a computer and waiting for it to turn on," Chris Bailey of Dallas, Texas, told CNN.

In the time it would take to boot up a computer, Bailey said he could have already checked Twitter, the news and the sports section on his iPhone 4.

In fact, Bailey doesn't remember the last time he turned on his laptop.

"Once you have a smartphone, you're kind of a slave to it," he said. "All that information is in your pocket ... it takes over your life."

"The Web Is Dead," a recent cover story in Wired Magazine, blamed applications for the demise, stating, "Two decades after its birth, the World Wide Web is in decline, as simpler, sleeker services -- think apps -- are less about the searching and more about the getting."

Wayne Fortin of San Diego, California, only uses his laptop about once a week. He says he prefers his smartphone's simpler applications to browsing the Web.

"The applications do everything I need to do," said Fortin, who previously used his laptop to check his social networks and do his banking. "But the ease of being able to pull a phone out of your pocket that does the same thing with apps makes it that much easier and faster."

"I'm usually sitting in my room, in bed, streaming Netflix right to my phone rather than going out in the living room," he said. "The only time I use my TV is when I'm playing Xbox."

One smartphone owner, John Sia, says he "pretty much lives off" his HTC Evo. And though he still has internet and cable in his Westchester, New York, home, per his girlfriend's request, Sia said it's not necessary.

"Part of it is me is being lazy and not wanting to get up and use it ... But I can do everything from my phone, so why get up?"

When he's done touring, Callahan says he'll most likely continue using his iPhone 4 as his primary computer and TV.

"I might just leave my laptop in a box somewhere at home and see what life is like [just] using a smartphone. Because so far, life is pretty great."