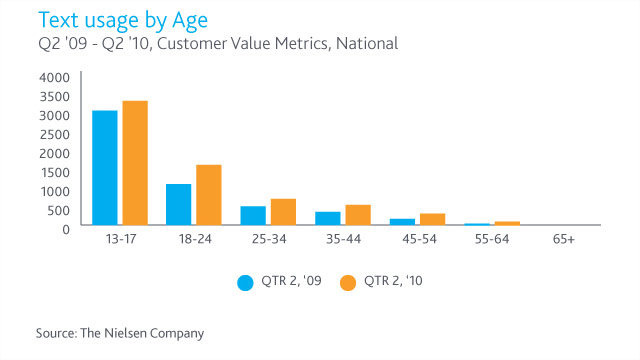 (Mashable) -- If you needed more proof that texting is on the rise, here's a stat for you: the average teenager sends over 3,000 texts per month. That's more than six texts per waking hour.

According to a new study from Nielsen, our society has gone mad with texting, data usage and app downloads. Nielsen analyzed the mobile data habits of over 60,000 mobile subscribers and surveyed over 3,000 teens during April, May and June of this year. The numbers they came up with are astounding.

The number of texts being sent is on the rise, especially among teenagers age 13 to 17. According to Nielsen, the average teenager now sends 3,339 texts per month.

There's more, though: teen females send an incredible 4,050 text per month, while teen males send an average of 2,539 texts. Teens are sending 8 percent more texts than they were this time last year.

Other age groups don't even come close, either; the average 18 to 24-year-old sends "only" 1,630 texts per month. The average only drops with other age groups. However, in every age bracket, the number of texts sent has increased when compared to last year. Texting is a more important means of communication than ever.

Texting is also supplanting voice calls -- 22 percent say SMS is easier than a phone call and another 20 percent say it's faster. Voice usage has decreased by 14 percent among teens and is decreasing in all age groups under 55. 18 to 24 year olds use the most minutes, but every age group between 18 and 55 talks on the phone more than the average teenager.

While voice may be on the decline, data and app usage is on the rise. According to Nielsen, data usage among teens has quadrupled, from 14 MB to 62 MB per month.

In a role reversal, teen males use more data than their female counterparts: 75 MB vs. 53 MB of data. App and software downloads also increased by 12 percent among teens in the last year.

These stats are eye-popping, but what's even more amazing is that these numbers only keep rising. Texting, data usage and app downloads are nowhere near their peak, but one has to wonder: how many texts is the average teenager actually capable of sending? What's the limit?