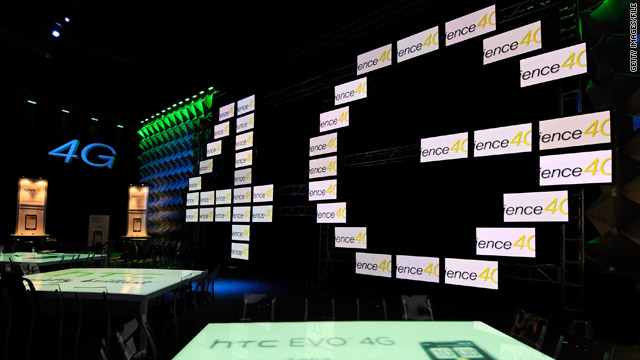 Signs for 4G are displayed in the Sprint room at the International CITA Wireless convention in Las Vegas in March.
STORY HIGHLIGHTS
RELATED TOPICS

Sprint plans to launch its speedier, fourth-generation internet in New York on November 1. The 4G network will come to Los Angeles, California, at the beginning of December and to San Francisco, California, in late December, the company said.

Sprint, the third-largest U.S. cellular provider by number of subscribers, rolled out its first 4G city network two years ago in Baltimore, Maryland. Since then, the telecom has added 54 cities, a mix of large metropolitan areas like Chicago, Illinois, and Las Vegas, Nevada, as well as smaller ones.

With the three imminent additions, Sprint can color in some crucial sectors of its 4G coverage map. It's an important weapon to have in the face of plans by Verizon Wireless, the largest U.S. cell carrier by subscribers, to cover 38 cities with its 4G network this year.

Moreover, the upcoming launches push Sprint closer to achieving its goal of covering the homes of 120 million Americans with its 4G network by the end of the year -- 10 million more than Verizon's plan.

But Verizon's 4G network can reach speeds faster than Sprint's. The new infrastructure Sprint uses is in partnership with Clearwire, so the major telecom is reliant on Clearwire (in which Sprint owns a majority stake) to determine where it will build the so-called Wi-Max 4G technology.

"The speeds with our 4G is significantly better than anything [customers] have experienced to date on a wireless device," Kellett said. "They just need it to be responsive enough and fast enough for what they're doing."

Kellett boasts that Sprint subscribers can receive access to unlimited wireless data on 4G, whereas she expects other carriers will put caps on how much customers can download. AT&T has already put a halt to unlimited data plans for new customers.

After Sprint 4G was launched in Baltimore, 20 months passed before a phone maker built a handset compatible with the faster network. With that Evo 4G smartphone from HTC and another from Samsung Electronics -- and 10 other miscellaneous devices -- Sprint is confident with its lead.

However, T-Mobile began selling its first phone designed to take advantage of its next-gen HSPA+ network last week -- another HTC phone, called the G2. Verizon says it will have 4G cards for laptops this year and will have a half-dozen 4G-capable products to show in January.

Verizon may add another gun to its arsenal. Rumors are flying that Apple will build an iPhone compatible with Verizon's network, a phone which may or may not use 4G.

"We feel very strongly about our Evo," Dunleavy, the Sprint spokeswoman, said. "We feel it can stand head to head with the iPhone."