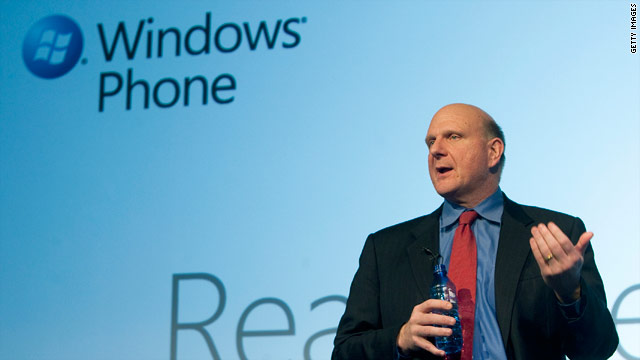 (CNN) -- Smartphones running Microsoft's new operating system are expected to launch in the United States and Europe this fall.

The Windows Phone 7 mobile operating system, which has been the subject of anticipation in tech circles, will go on sale in the U.S. on November 8, according to Windows-focused blogger Paul Thurrott, who says he was clued into the announcement by a "very reliable source."

According to other rumors circulating tech blogs, phones running the new mobile operating system from Microsoft Corp. could go on sale worldwide as early as October, possibly on the 21st, according to Neowin, a blog that also cites anonymous sources.

Microsoft has not confirmed those dates.

The phones will be available in several models from various handset makers. The common thread is the Windows Phone 7 operating system, which touts itself as a more efficient way for people to find information quickly.

Microsoft announced that it was working on the new mobile operating system at the Mobile World Congress event in Barcelona, Spain, in February.

Whatever the exact date of the operating system's launch, buzz about the phones is spreading online.

In two recent ads for the devices, Microsoft tries to paint other smartphones as time-sucking devices that pull people away from real-world interactions with loved ones.

Windows Phone 7, by contrast, is pitched as sleek and easy, with home screens that show phone calls, texts, Facebook status updates, photos and more, all from a single screen. In one ad, a voice-over says the phones provide "less stop and stare; more glance and go."

The phones will integrate

with Xbox Live, Microsoft's internet-connected gaming service, and with the Zune, the company's MP3 player.

Windows' mobile operating system will face stiff competition from the BlackBerry, which is the leading smartphone in the U.S., as well as the more-consumer-focused iOS from Apple, which is used on iPhones, and Google's Android platform, the fastest-growing of the bunch.

Windows phones have received some good reviews, but other tech writers have doubts that Microsoft, which is seen by some as less innovative than Apple and Google, will be able to make a big splash on the smartphone scene.

The blog Engadget, which posted a thorough review of the new Microsoft mobile operating system, says Windows Phone 7 will have to be "nearly flawless" to compete.

Some models for the new batch of Windows Phones have been leaked online, but it's unclear exactly what hardware models will be available.