Why you need a 'zombie apocalypse' phone 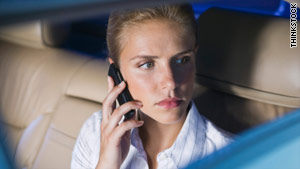 A low-end backup phone can come in handy during an emergency such as car trouble -- or a zombie attack.
STORY HIGHLIGHTS
RELATED TOPICS

(CNN) -- You know it will happen someday: Zombies are chasing you down the street, groaning for your blood. You've been holed up for a week, and there's spotty cell service. It sure would be handy to request an emergency ammo drop from the black-helicopter guys.

No? OK, maybe there's a major blizzard. The power in your part of town goes out for days. Your landline is knocked out too. But there's still a faint cell signal from a couple of miles away. It would be no trouble to traverse that distance if there weren't eight feet of snow piled outside your door. You're running out of food and firewood. How do you call for a rescue?

So maybe the zombie apocalypse thing is a wee bit unlikely. But for emergencies, it still helps to have a simple, small, hardy backup phone that can make calls, send or receive text messages, and hold a charge for a very, very long time.

Yes, wireless networks often go down during disasters, but they also can come back online (at least in spots) before power has been restored to buildings. Or sometimes, voice service goes down, but text messages will still work. (During Hurricane Katrina, text messaging saved lives and was a key coordination tool for NOLA.com, according to Online Journalism Review.)

Or sometimes, wireless carriers or emergency personnel can set up temporary emergency cell towers within a few days.

But the battery on your regular cell phone may not hold a charge that long. So your nasty neighbor who won't share his drinking water might be chatting away to his daughter in Seattle while you're kicking yourself for not powering down your phone two days before.

A low-end, energy-efficient backup phone also can come in handy during smaller-scale emergencies -- if your car breaks down or if you just can't find your regular phone anywhere.

This handset was designed primarily for users in the developing world, where access to cell signals and electricity can be very unreliable. It's available in the U.S. from many online retailers, in the $20 to $25 price range for an unlocked version -- one that operates on multiple wireless networks. This makes it an affordable part of anyone's emergency preparedness kit.

Joire noted, "It's very refreshing to have a phone in your car that can only do three things: make calls, do text messages and set alarms. That's it! And the text messages are all lower case."

The Motofone F3 is a very thin (about 9mm thick) candy bar-style phone with a small e-ink display -- a technology with extremely low power requirements, since it mostly draws power only when the screen changes. The handset weighs just 68 grams (2.4 ounces). The charger is also very small.

Joire especially likes this phone's voice-prompting feature: "When you plug in a SIM card, it tells you to pick from three languages. When you pick a language, it asks you whether you'd like voice prompting. You should say yes, because then, for pretty much everything you do, you'll get walked through by voice. That's helpful because this visual interface is very minimal. The segmented OLED display is mainly just icons baked into the e-ink, hard to interpret."

According to Joire, the phone's lithium ion battery "lasts for a month or more on standby, with something like 200 hours of talk time." A 2007 GearDiary review of this phone reported the battery life as about two weeks. Neither estimate had been confirmed.

Joire was planning to take her "zombie apocalypse" phone to the Burning Man gathering (August 30-September 6 in the Nevada desert). While there's no official cell service in remote Black Rock City, some attendees may set up ad-hoc wireless networks. (Last year, a cell tower installed on private land near the festival proved highly controversial.)

Joire tweets at Twitter/tnkgrl, and you can tweet via text message, so it's possible she may tweet from Burning Man via her F3. Also, she plans to blog about her zombie apocalypse phone when she returns.

Whichever phone you choose as your emergency backup, get it ready to go. Put a SIM card in it -- and if prepaid, top it off with enough credit to cover lots of talking and texting. When you first charge it, condition the battery by letting it drain completely, then recharge it completely.

Make sure you top off the charge at least weekly. Store the phone with its charger in an easily accessible place, and maybe put some reflective tape on it so you can find it better with a flashlight.

Consult local, state and federal emergency preparedness agencies to find out which numbers you should program into the phone, for both calls and texting. Also, program in numbers for your family communication plan.

And of course, program in the numbers of your zombie apocalypse phone tree. Better to give them a head start early than a head shot later.