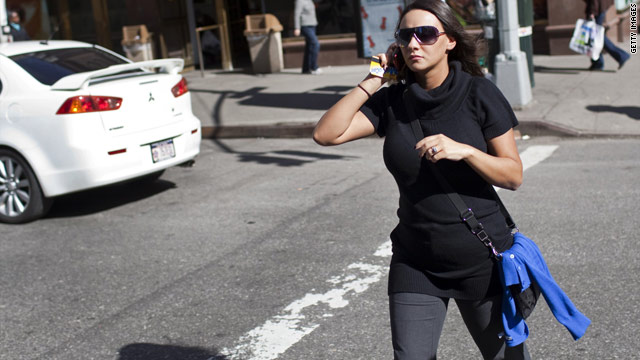 Women, African-Americans, Hispanics and Southerners use mobile phones the most, according to a yearlong Nielsen survey.
STORY HIGHLIGHTS
RELATED TOPICS

(CNN) -- Women text and talk on their mobile phones more than men.

African-Americans and Hispanics use their phones more than whites, and Southerners out-chat their northern neighbors while on the go.

And here's a real shocker: Teenagers text way more than anybody else.

Those are the findings of a yearlong survey by the Nielsen Co. The statistics firm studied the monthly mobile phone bills of more than 60,000 U.S. customers.

Women in the survey, whose findings were released Tuesday, spent about 22 percent more time chatting on mobile phones than men. They spent about 856 minutes per month on the line, on average, compared with 667 minutes for men.

Women also texted more, sending or receiving an average of 601 texts per month, compared with 447 for men.

According to the survey's data, black users sent and received about 780 text messages per month and Hispanics got or sent about 767 -- significantly more than whites, who checked in with 566 texts in the same time period.

The Nielsen report on the survey, conducted from April 2009 to March 2010, did not offer any possible explanations for the findings.

In the South, folks spent significantly longer chatting on their mobile devices.

Florida, with one of the highest median ages in the country, ranked high on the list of active talkers but among the lowest in text messaging.

Meanwhile, the most text-happy states were Mississippi, Pennsylvania, Ohio, Oklahoma, Kansas, Wyoming and Utah. Texters in each state averaged more than 600 messages per month.

In news that will come as no surprise to parents everywhere, teenagers were far and away the busiest texters.

They averaged a thumb-numbing 2,779 texts per month, according to Nielsen.

Not surprisingly, mobile phone users older than 65 were the least active, barely registering with an average of 32 texts per month.