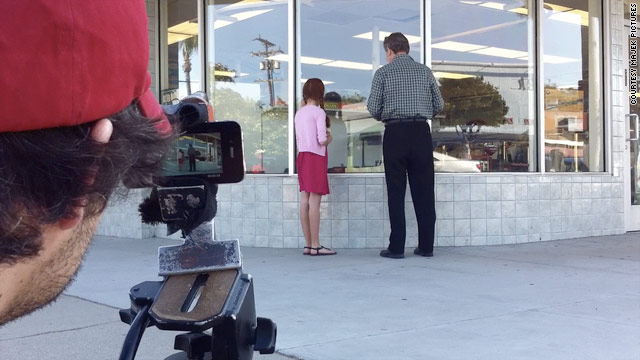 Michael Koerbel and Anna Elizabeth James collaborated on one of the first short films shot and edited entirely on the iPhone 4.
STORY HIGHLIGHTS

(CNN) -- Ryan Gonzalez really wanted to make a music video for his first solo album -- but like many independent artists, he had no budget.

So Gonzalez, a Hawaiian singer who goes by the stage name R. Vaughn, found a director with a plan to shoot the project cheaply.

Digital designer John Garcia, a colleague from his Honolulu office, had just bought the iPhone 4 and downloaded Apple's iMovie app, a program that allows iPhone 4 users to shoot and edit HD video using only their phones.

The two shot the video one morning on the scenic Makapu'u Lighthouse trail overlooking the Pacific Ocean. Garcia started cutting footage at the diner where they had breakfast after wrapping up and spent a total of four hours over the next 10 days making edits.

"Whenever I had time to open up the project, I'd add a clip and listen," said Garcia. "My entire family memorized the song."

The result, a simple but professional-looking clip, is now on YouTube and R. Vaughn's website. Gonzalez accomplished his low-budget music mission. He only had one expense: Garcia's breakfast.

Despite the iPhone 4's well-known antenna woes, Garcia and Gonzalez are among a group of artists and bloggers who are optimistic about its potential as a high-def camera and mobile video-editing tool. CNN iReport's "Video editing on the iPhone 4" assignment drew in 10 submissions as of Thursday, and iPhone 4 clips on YouTube and Vimeo run the gamut from short films to news reports.

Gonzalez and others say the $4.99 iMovie app -- even with some flaws -- has the potential to open new doors for artists who have great ideas but no money. Gonzalez believes the user's ability to shoot and edit video on the phone and upload it to the web may prove particularly useful to independent musicians.

"Traditionally, you would spend a lot of time on production and rely on someone else to do dissemination, like a radio station or a label," said the singer.

"For an independent musician, I think this technology is awesome, because you can eliminate all the other processes and go straight to getting your stuff up. It's making everything a lot cheaper, too."

Bloggers and citizen journalists will also benefit from the iMovie app and similar technologies, according to Karen Mitchell, professor of convergence journalism at the University of Missouri.

"It puts the power of journalism in more people's hands," she said. "One of the most iconic images [of 9/11] was taken by a woman with her amateur digital camera. Those sorts of moments are really important to putting out information, and we'll take it in whatever form it comes."

But while users say Apple has made filmmaking more accessible than ever, many also consider the iMovie app a work in progress.

iReporter Alex Acosta of Sherman Oaks, California was pleased with the iPhone 4's HD camera, but said editing on it was more trouble than it was worth.

"I would recommend taking the raw footage you took from your phone, uploading it to your computer and doing your simple editing there," said Acosta, who shot video at a press briefing last month and spent hours trimming it on the small smartphone screen.

The app restricted him to a limited number of "cookie cutter" templates that he couldn't customize, he said. "You're gonna see it and go, oh, that was done on the iPhone 4. It's gonna make you look cheesy."

iReporter Paula Brahan of Hattiesburg, Mississippi, noticed the same thing while editing shots of her dog.

"On the computer [version of iMovie], you can see the individual panes of your movie," she said. "They're not compressed, as they are visually, on your phone."

Like other users, she disliked the way the title stayed onscreen for the duration of the clip -- a problem because it blocked out parts of her home videos.

It's also a problem for California-based iReporter Chris Allen, though for different reasons.

Allen, who runs YoYoSkills.com, says he knew when he got the iPhone 4 that yo-yoers would be interested in using it to record contests and tricks. But there are too many stumbling blocks to editing more than three minutes of footage, he said.

"The biggest barrier to entry, for me, is how hard it is to trim down a clip," he said. "On the Macbook, it's really easy to select the part of the video you want, but with the iPhone, you have to drag your finger to trim the video. And you can only trim about eight seconds at a time, so you constantly have to tap, drag and pull back."

Allen also had to put his hand over the lens for a black background, because he couldn't put text over stills.

"If you want a video editor where you can do extremely rudimentary editing -- very, very basic editing -- and it doesn't matter too much about the precision of your clips and you don't care about transitions too much," he said, "it's probably OK. Five bucks well invested."

Still, others have found ways around those limitations. Michael Koerbel and Anna Elizabeth James, MFA students at the University of Southern California and co-founders of Majek Pictures, started writing "Apple of My Eye" before their pre-ordered phones arrived. The short follows a girl and her grandfather who discover a model train in a shop window.

"We put all our cards on the table as to what we had access to," said Koerbel, who directed the short film. "One of those things was my dad's train set."

The train set was in Arizona. The team called up any actors they knew and were soon on their way from Southern California, aiming to wrap shooting and editing within 48 hours.

"I had never tried to make a movie on a small camera before," said James, who edited the film. "I first started doing at-home movies of my kids and creating content really simply. Then you go to film school, and it gets really complicated. Going back to the phone was simplifying it all over again.

"Trying to accomplish this in such a short amount of time, I had to make sure the choices I was making were right, because it is quite a process to edit on the phone."

They shot about six hours of footage, which James pared down to a short less than two minutes long. On the five-hour drive back, she was already editing in the car.

The iPhone's size made shooting a unique experience, according to Koerbel.

"We literally took the camera and wedged it into the train engine with some foam, and let it ride the train. It took a lot of tries to get that right," he said. The filmmakers also designed a rig, with the help of Birns and Sawyer Inc., to help clamp the camera on a dolly. "We were able to do everything with that camera that we did with the film camera."

In total, they spent $103 on the project. Not counting the cost of the iPhone, of course.

"The thing that's amazing for us is that, sometimes we shoot hundreds of miles away and can't do anything until we get back," said Koerbel. "She already had a rough cut by the time we pulled into our driveway."

Social media is a key component in the app's success, according to iReporter and weight-loss video blogger Tony Posnanski.

Posnanski, who has lost more than 221 pounds since 2008, uses his blog to encourage others to lose weight and stay healthy. He says the iPhone has combined the processes of shooting, editing and uploading -- making it easy to stay connected.

"The iPhone 4 is going to change the way you do video blogging," he said. "With Sony, it took three hours to make a two-minute video. I can take a video now and upload it to iReport and Facebook all within a matter of minutes."

Garcia agreed. "There's going to be a day when you see feature-length films shot on handheld devices and uploaded straight to the internet. It's just a matter of time before the price comes down and people get a bit more savvy with technology."

Posnanski said he's not a "movie master," though his YouTube channel has scored thousands of views. Despite this, the restaurant manager from Sanford, Florida, said all you need to film on a smartphone is sheer creativity.

"I can actually take my creativity and put myself out there," he said. "When you have video or easier access to the internet, and it's not something hard to do, you can show your talent a bit more."

Even Koerbel, used to directing on sets surrounded by cast, crew and extras, appreciated the app's simple editing technique.

"If I were 9 years old and I had an iPhone, I'd be out filming," he said. "I think we're three to six months away from seeing a wave of people with little stories, people who never had a voice before, who can now put their story on YouTube."