When phones are too big for pockets 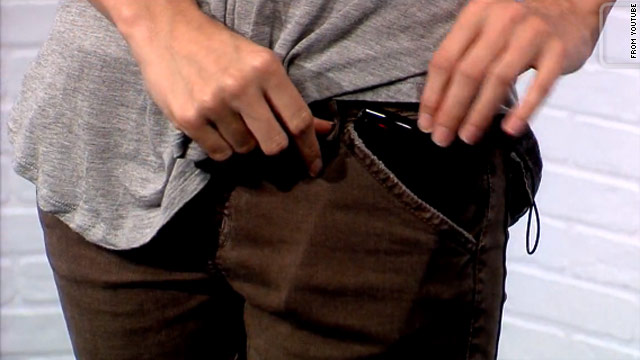 (CNN) -- Something weird is happening to mobile phones: After shrinking from enormous Zack Morris proportions in the '80s and '90s, they're getting bigger again.

So big, in fact, that some won't fit in jeans pockets anymore.

The Dell Streak, which is set to be released in the U.S. later this summer, is the biggest of the big-daddy phones so far, with a 5-inch screen. The screen of the iPhone 4, by comparison, measures only 3.5 inches diagonally.

When held up to a person's ear, the Dell phone looks like a book.

The Streak's mondo screen has become the focus of much debate on the internet, with tech bloggers arguing about what kinds of pants you'd have to wear to carry it around in your pocket; how big your hands have to be to hold it; whether or not people will stare at you when you're using it; and, perhaps most significantly, what exactly constitutes a phone these days.

Is a phone just any device that can make calls? Or does it have to be portable enough to carry with you, regardless of how baggy your pants are?

Mobile phone makers are trying to "push the boundaries of what is acceptable in a pocket," said Ross Rubin, executive director of industry analysis for consumer technology at the NPD Group.

Several Android phones -- which run on an operating system developed by Google, as opposed to those by Microsoft or Apple -- have come out with screens that are larger than 4 inches diagonally.

The HTC Evo and the Motoroloa Droid X, for example, both have 4.3-inch screens. Sony Ericsson is rumored, according to the blog Engadget, to be working on another 5-inch smartphone, the same size as the Dell Streak. (As a side note, the HTC Evo is so big that it comes with a kickstand).

In video reviews of these ever-larger phones, it seems almost to be a requirement these days for tech pundits to try to shove the things in their pockets as a way to determine whether the devices are truly portable.

In one such video, Veronica Belmont, co-host of a video show called Tekzilla, puts the Dell Streak in the front pocket of her pants only to find that about a third of the phone is still sticking out.

One YouTube video, titled "Dell Streak vs. Jeans," starts with a shot of a man's waist line, shown only from the thighs to mid-belly.

"The reason you're staring at my hips is that I'm going to show you what the Dell Streak is like, fitting in a jeans pocket," the host says. "Now, these jeans have got quite a deep pocket and, even still, it pokes out a little bit over the top. You can tuck it right in and there's still a corner coming out at the top there."

The man then proceeds to stuff the Streak into his back pocket, which he decides isn't such a good idea, either.

It sticks out, which could make it easily accessible to pickpockets, he says. "And you're certainly not going to want to sit on it."

Dell did not return CNN's phone calls about this story.

The other potential issue with large phones is that it can be difficult to hold them up to your face, depending how big your hands are and if your arms are strong.

When Chris Hall tested the Dell Streak for the British website Pocket-lint, he said his hand literally became tired and stretched-out from holding the phone.

He said he also got some stares from strangers.

"People are going to look at you in a funny way" when you're holding such a large gadget up to your face, he said.

Hall still gave the phone -- which is sometimes referred to as a small "tablet" computer rather than a large phone -- a good rating: 8 of 10 stars.

In a video review for the blog Engadget, Richard Lai takes a bit of a contrarian view, saying the Dell Streak is still small enough to carry comfortably in a standard pant pocket.

"Obviously you see a bit of bulge here," he says after putting the phone in his jeans pocket, "but you get that with any phones these days, really, you know? Sliding it in and out is no problem, you see?"

Lai does note, however, that, if you want to walk up a flight of stairs with the 5-inch phone in your pocket, you should "shift your phone as far to the side [of your pocket] as possible" in order to maintain a normal range of movement.

"But other than that we've had no real issues with it," he says.

Despite some fuss about the bulk of these 4- and 5-inch phones, there are some clear advantages to screens with more real estate.

Those functions are butting up against some long-held ideas about what a mobile phone is -- namely that it's a gadget that you can easily carry in a pocket and hold to your ear to make a call.

So maybe we need a new cell phone definition:

One that can fit in your cargo shorts.