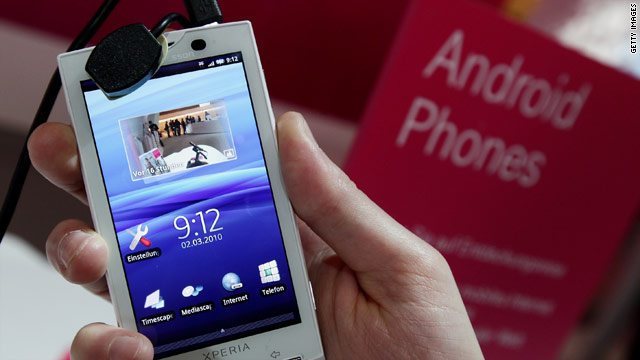 (CNET) -- It may be true that no cell phone is perfect, but the handset world isn't taking too kindly to Apple CEO Steve Jobs' public assertion that other smartphones suffer from the same antenna and signal problems that have been widely reported regarding the iPhone 4.

And, in what's turned into an ugly back-and-forth PR mud fight, Apple is firing back by making its internal signal test results public to insist that it's not just pulling rivals' flaws out of thin air.

Hui-Meng Cheng, chief financial officer at HTC, told The Wall Street Journal on Monday that "the reception problems are certainly not common among smartphones," and a representative from Samsung said that it "hasn't received significant customer feedback on any signal reduction issue for the Omnia 2," one of the phones that Apple singled out as suffering from similar reception issues if held in a way that blocks the antenna.

The two Asia-based companies are by no means the only ones to come out swinging against Jobs' remarks that "every phone has weak spots" at the press conference that addressed the reports of poor reception.

(The reports had culminated earlier that week in Consumer Reports declaring that it did not recommend buying the iPhone 4.)

Jobs simultaneously announced that free "bumper" cases to alleviate the problem would be offered to all iPhone 4 buyers until September 30.

"Nokia has invested thousands of man hours in studying human behavior, including how people hold their phones for calls, music playing, web browsing and so on," a release from the Finnish phone manufacturer read. "As you would expect from a company focused on connecting people, we prioritize antenna performance over physical design if they are ever in conflict."

The most forceful remarks may have come from BlackBerry manufacturer Research In Motion (RIM), whose co-CEOs Mike Lazaridis and Jim Balsillie called it a plain and simple case of scapegoating.

"Apple's attempt to draw RIM into Apple's self-made debacle is unacceptable," a statement Friday from the co-CEOs read. "Apple's claims about RIM products appear to be deliberate attempts to distort the public's understanding of an antenna design issue and to deflect attention from Apple's difficult situation."

With over 3 million handsets sold in less than a month, Apple has declared the launch of the iPhone 4 its most successful product debut in history. But "Antennagate" continued to draw scrutiny from high places.

Sen. Charles Schumer (D-N.Y.) issued an open letter to Apple requesting a free fix for the problem, and after the Consumer Reports warning some analysts speculated that the controversy could result in a product recall.

With its carefully crafted public-relations strategy and culture of tight-lipped product development, over the past few years critics as high up as Google executives have slammed Apple for allegedly turning into the Orwellian figurehead that it claimed to stand up against in its famed "1984" television advertisement.

The antenna controversy, with Apple's denial that there was any unique problem with the wildly successful iPhone 4, was no exception.

So the company's expanded response made a conscious turn toward transparency -- a video-heavy Web site that the company set up in the wake of the antenna controversy, showed footage of the extensive internal tests that Apple says have been the fruits of the $100 million it's invested in "advanced antenna design and test labs."

Along with both the iPhone 4 and its 3GS predecessor, the videos show antenna-grip dissonance plaguing the Samsung Omnia II, HTC Droid Eris, and BlackBerry Bold 9700.

The diagnosis for all the phones tested: "In weak signal areas, this grip may negatively affect signal strength."

Of course, the burden of responsibility for alleviating problems with cell phone signals can be placed on a cell phone carrier as well as a handset manufacturer, and Apple's initial response to "Antennagate" asserted that its only mistake was a "simple and surprising" software flaw that displayed more bars of reception than actually existed, bars which disappeared with the antenna "death grip," subtly suggesting that maybe the real problem was with the partner carrier, not Apple.

In the U.S., the iPhone is available exclusively on AT&T's network, a carrier with service that has been much maligned by iPhone owners -- just look at how giddy iPhone fans become in sync with the ebb and flow of rumors that the iPhone may be available on Verizon soon.

The controversy is made even noisier by the fact that Consumer Reports, the influential publication that said earlier this month that the antenna issue with the iPhone 4 was enough for it to recommend purchasing the lower-end iPhone 3GS instead, was actually reversing a previous assertion in the process. Fewer than two weeks earlier, Consumer Reports had said that antenna issues were, in fact, a regular occurrence in the handset world.

"Indeed, all cell phones, from the mightiest smartphones to the most basic flip models, must consistently overcome a major communication obstacle: you," a Consumer Reports blog post explained on July 2.

"RIM in particular has said that it's a leader in antenna design and that it has taken steps to avoid the kind of issues that the iPhone is facing and has avoided the kind of antenna designs used on the iPhone 4 in favor of ones that are more resilient to this kind of interference," said Ross Rubin, an analyst with market research firm NPD Group, to CNET on Monday.

"They don't say in their statement that RIM devices are immune to signal degradation due to physical contact."

So to some extent, Apple's rivals may be trying to save face, too. The result, at least for now, is an increasingly nasty war of words over whether there's a problem for everyone or a problem for no one--and a bunch of free rubber bumpers.

"You can reconcile the statements that Apple and its competitors are making if you accept that other competitive handsets may indeed be more resilient to this kind of interference, yet not immune when the right conditions are applied," Rubin said.