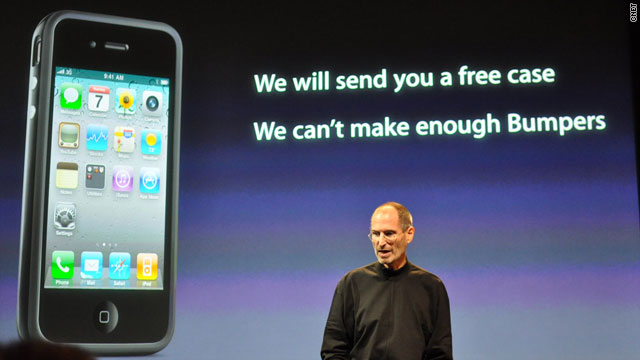 (CNN) -- After a presentation saying the iPhone 4's reception problems have been "blown way out of proportion," Apple CEO Steve Jobs said Friday that all owners will receive free cases to fix the issue.

People who already paid for a case, which reduces interference, will get a refund, Jobs said.

"We're not perfect; phones aren't perfect," Jobs said. "We want to make all our users happy."

Customers will be able to visit an Apple store for a free case between now and September 30. Jobs said Apple has not made enough bumpers -- hard rubber bands that cover only the edges of the phone -- to offer them free.

The iPhone 4 set Apple sales records after its release June 24, drawing positive reviews from tech bloggers and almost religious fervor from Apple fanatics who lined up for hours to get their hands on one.

The smartphone has sold more than 3 million units, Jobs said Friday, and has been the most successful product launch in Apple history. He maintained that, despite the reception issue, the phone remains "our best product ever."

Analysts found that holding a certain spot on the metal band around the edge of the phone leads to interference, causing weakened reception and, sometimes, dropped calls. The band houses the phone's antenna, part of a design that made the sleek iPhone 4 about 25 percent thinner than its predecessors.

The report pushed the problem onto the sets of late-night comedians, creating a rare public-relations crisis for Apple, which has enjoyed positive reviews for years for products including its iPhone, iPad and MacBook laptop computers.

Jobs set up Friday's announcement with a lecture-style presentation, noting that all mobile phone antennas have problems and showing what he said was video of similar reception issues on other smartphones.

Even as he made the announcement, Jobs said that returns of the iPhone 4, which have been 1.7 percent, have been lower than the 6 percent return rate for the previous generation iPhone 3GS.

He did acknowledge that the iPhone 4 drops more calls than the 3GS but said the difference is less than one call per 100.

He said only a small percentage of users have been affected.

"We care about every user," he said. "We're not going to stop until every user is happy."

Jobs bristled when asked about media reports that an Apple technician told him about the reception problem before the phone was released.

He wrapped up the news conference with a parting shot at media coverage of the issue.

"I wish we could have done this for you in the first 24 or 48 hours, but then you wouldn't have had as much to write," Jobs said.

Early reactions to the announcement were lukewarm in the online tech community.

"From a customer's point of view, this is a really unsatisfying response, because a lot of people feel like the bumper cases -- or cases of any kind -- are just not that pretty," said Dylan Tweney, an editor at Wired.com. "They definitely make the phone look less attractive than it does by itself."

"Truth be told, iPhone users can get a signal just as well as with any other phone as long they don't put their finger on the little crack in the lower left side of the wraparound metal antenna," he wrote.

Responses from CNN Tech readers ranged from dismissive to upbeat. "I think the whole thing is a big fuss over nothing," said a reader responding to the CNN Tech feed on Twitter. "It certainly won't stop me getting one. The free case is more than enough."

Tweney acknowledged that the problem is relatively minor in the grand scheme of things but that by downplaying it so much, Jobs and Apple run the risk of still not seeming sympathetic.

"This press conference does absolutely nothing to alleviate the impression that Apple is an arrogant company led by an extremely self-confident, arrogant CEO," he said. "There's no doubt about that. But they believe they're in the right and that there's not a serious problem."

In other iPhone 4 news, Jobs said that white phones will be shipping by the end of July. So far, only the black version of the phone has been available. He also said Apple plans to release the phone in 17 more countries on July 30.

CNNMoney's Mason Cohn in Cupertino, California, and John D. Sutter in Atlanta contributed to this report.