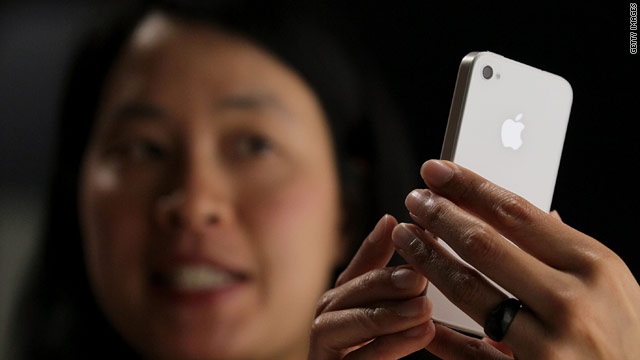 The iPhone 4 will be the topic of discussion at an Apple news conference Friday.
STORY HIGHLIGHTS

(CNN) -- After a decade of hit products that made Apple the cutting-edge darling of the mobile and computing world, the rollout of the iPhone 4 has been an atypical and ugly scratch on the company's glowing image.

From a lost prototype of the device that slipped into the hands of a technology blog to what some have called a tone-deaf response to the new phone's reception problems, the knocks have kept on coming.

On Friday, Steve Jobs and his Cupertino, California-based company hope to set things to rights with a 1 p.m. ET news conference expected to address the drumbeat of complaints, and bad press, about the iPhone 4's antenna.

What is said at that event, analysts say, will go a long way toward determining whether the tailspin ends now or continues for weeks, and maybe months.

What are some of the ways you tried to fix your iPhone?

"Apple's image, from just before the release to today on this phone, is taking a beating," said Edward Snyder, principal analyst with San Francisco-based Charter Equity Research.

Video: iPhone 4: There's not an app for that

"I don't think this is cataclysmic by any stretch, but it's unflattering, and it's getting worse the longer they stonewall."

The iPhone 4 broke Apple sales records upon its release on June 24, drawing positive reviews from tech bloggers and almost religious fervor from Apple fanatics who waited hours to get their hands on one.

It sold more than 1.7 million units in its first three days, the most successful product launch in Apple history.

One of the new phone's vaunted features is its sleek design, nearly 25 percent thinner than its most recent predecessor. That's achieved, in part, by snaking the antenna through a metal band around the edges of the phone.

Analysts determined that holding the band in a certain spot leads to interference, causing weakened reception and, sometimes, dropped calls.

For its part, Apple downplayed any problems.

Jobs, who in recent months has taken to communicating publicly through e-mails with customers, fanned the flame with what critics called a brusque dismissal of the complaints.

"Just avoid holding it in that way," he wrote in an e-mail that circulated on the Web during the last week of June.

Apple later issued a statement saying it had discovered a "simple and surprising" software problem that showed the phone as having better reception in certain spots than it actually did. The statement failed to satisfy many, as one tester after another noted reception dropping because of how the phone was held.

(On Thursday, Apple released an update to the iPhone 4's operating system geared toward solving the problem of too many bars being displayed when reception is bad.)

Problems with Apple products, and the iPhone in particular, aren't unprecedented. The original iPhone had problems with an unresponsive "dead strip" and battery-charging glitches on some models, although those relatively minor tweaks went largely unnoticed amid the innovative phone's positive response.

Apple also was publicly pushed into offering a $100 rebate to early customers after knocking $200 off the price of the phone after only a few months.

The iPhone 4's problems continued to buzz throughout the technology blogosphere and in some mainstream media reports before reaching a crescendo Monday, when Consumer Reports said it had tested the phone and confirmed that the reception problem is real.

"It's official. Consumer Reports' engineers have just completed testing the iPhone 4, and have confirmed that there is a problem with its reception," the esteemed product-testing group wrote Monday on its blog. "Due to this problem, we can't recommend the iPhone 4."

That catapulted the iPhone 4 to a place where no public-relations person wants to see their product: the target of jokes on late-night talk shows.

On Tuesday, on "the Late Show with David Letterman," the host cracked wise about the problem.

"Apparently, there's something hinky about the new iPhones. They're not hooked up right. ... There's a problem with the antenna," Letterman said. "They don't like to be held -- like my ex-wife."

He followed with the "Top 10 Signs You've Purchased a Bad iPhone," with entries like "Looks, Smells and Tastes like a Pop-tart" and "Only accepts calls from Mel Gibson."

Perhaps as a result of the bad press, Apple's stock has taken a hit. During the past week, shares were down about 1.5 percent, and they'd dropped 8 percent overall since the iPhone 4 came out in late June.

So what will Apple do Friday? Snyder said he expects the company to announce that it will give away free covers for the phone. The protective cover -- or even a bit of duct tape -- creates enough of a buffer between the hand and the antenna to stop the reception problem.

He seriously doubts the phone will be recalled, as some have suggested, saying that a recall could cost Apple billions of dollars and be more of an inconvenience to customers than the problem itself.

To Apple's credit, he said, the problem is one that appears to have come from the company trying to stay on the cutting edge of technology.

"They've obviously caused a splash with everything they do, but to do that they're having to go out on the limb on technology," Snyder said. "You can do inexpensive phones that don't have any really advanced parts and be completely safe, or you can go like Apple and be out on the edge, and I think this time they got zapped a bit."

Regardless of Friday's news, Snyder expects Apple to come back strong.

"It's one of the most stellar brands, and this doesn't change that too much," he said. "It just smudges it a little bit."

But he said the mess could be Apple's first stumble at a time when a misstep could cost big. With a growing number of rival smartphones running Google's popular Android operating system, customers looking for cutting-edge phones have options, he said.