Pulse: Why I almost didn't return my iPad 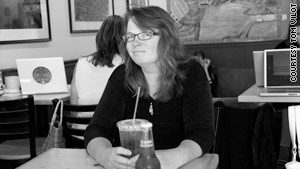 Amy Gahran says an app called Pulse is so good that she almost had to keep her iPad.
STORY HIGHLIGHTS
RELATED TOPICS

Editor's Note: Amy Gahran writes about mobile tech for CNN.com. She is a Bay Area writer and media consultant whose blog, Contentious.com, explores how people communicate in the online age.

I'm going to return it within the 14-day window and pay a $50 restocking fee. I figure that's a fair rate to essentially rent this device for a couple of weeks, give it a good test run and see what the fuss is about.

After using it for a few days, my response so far is mostly: Meh.

I'm a longtime Mac and iPhone user. For my purposes, the iPad is neither here nor there -- not cool enough to warrant spending at least $500 of my hard-earned cash. (I would never shell additional monthly fee for an AT&T 3G data plan.) It's just not quite functional or convenient enough for me. I think it's just a bit too big and heavy to be a convenient mobile device and far too underpowered to be a desirable multimedia computer.

(* Your iPad mileage may vary.)

Sure, future iPad software updates could add useful features such as multitasking, printing and native document handling (word processing or spreadsheets that are not housed within an extra paid app). However, I believe in spending money only on stuff that exists now, not gambling on maybes.

But, as I sat on a cross-country flight this week, soaking up the on-board Wi-Fi, I encountered one app that gave me pause, one so interesting that made me consider not returning the iPad.

That app is Pulse, a slick iPad newsreader. It costs $3.99, and it's only the second iPad app I was willing to pay for during this test run. The first, of course, was Plants vs. Zombies.

Pulse is an RSS feed reader on steroids. RSS feeds are a technology that websites use to distribute their content so it can be read or used in places other than the original site. RSS feeds aren't meant to be read directly by people because they're really just content wrapped up in ugly XML code. But they are useful if you "feed" them into software that lets you view this information from several sites all at once, in one place. Google Reader and Netvibes are popular RSS feed readers.

I've used RSS feed readers for many years. In my experience, most of them are still pretty ugly and clunky; a necessary evil.

In contrast, Pulse offers a very slick, user-friendly experience. It's actually enjoyable, not just useful. It smoothly transitions from reading headlines to synopses to full stories, including images and all.

It's easy to add or remove news venues and to scan what's available. It's not great for managing large numbers of RSS feeds. But if you have a few favorite news sites or blogs you want to scan regularly over breakfast, Pulse is a good choice.

The trouble is I found out about Pulse because The New York Times is angry at Apple over this app. Now, the Times freely distributes RSS feeds containing headlines, summaries and links to full stories on its own site, under the condition that content delivered via those feeds not be reused for commercial purposes.

Here's the catch: Pulse is not a free app. It doesn't cost much, but iPad users do pay something for it. So the Times' lawyers sent a notice to Apple complaining that this was an unauthorized commercial reuse of their property.

In response to that legal squawk, as Kara Swisher of All Things D reported, on June 8 Apple removed Pulse from the App Store for a few hours. This happened the same day that Apple CEO Steve Jobs was praising Pulse at a major conference for software developers.

Apple quickly reinstated Pulse to the App store but, as of Tuesday, it was unavailable for purchase once again.

Around the internet, lawyers, app developers and media professionals have been debating whether this controversy means The New York Times is declaring war on feed readers.

The Citizen Media Law Project is skeptical about that conclusion. A podcast from This Week In Law features a great roundup of views on the copyright and other legal aspects involved.

But for regular folks who might be considering buying an iPad, I think this dustup highlights a more pressing consumer issue: What are you really buying, and what do you really own, on a mobile device?

Apple can remove any app installed on an iPad or iPhone without the consent of the device owner or app developer. Gary Rosenzweig of MacMost pointed out to me that in 2008 Steve Jobs confirmed that this "kill switch" capability exists.

Yes, it's unlikely that Apple ever would revoke user access to an iPad app. But the fact that they could do that makes me hesitate to spend serious money on any Apple mobile device about which I'm otherwise ambivalent simply because I fall in love with a particular app.

I've owned an Amazon Kindle for more than a year, and I love it. Like Apple with its apps, Amazon can revoke access to any Kindle book I've purchased and downloaded (not just to my Kindle itself, but also to the Kindle app on my iPhone and iPad). And in fact, nearly a year ago Amazon did delete a purchased book from my Kindle, a literature anthology that wasn't completely kosher on its rights clearances. (In case you're wondering, it was a George Orwell anthology that included 1984. I'm not kidding.) Amazon gave me a refund but wouldn't give me back the book.

I was annoyed by the censorship potential of that experience, but kept my Kindle. On the whole, that device, independent of any particular piece of content on it, offers me ample convenience and a good user experience for a fair price.

As I said, the iPad as a device simply does not thrill me yet. The experience of one iPad app, Pulse, was compelling enough to make me consider keeping this first-edition iPad. Briefly.

But since Apple could revoke Pulse or any app from my iPad at any time -- and since they've already shown a willingness to yank the particular app I like from their store -- that seals it. My iPad is definitely going back to the store.

I'll wait until the iPad is compelling enough on its own merits, not just because of an app, to give it another spin.