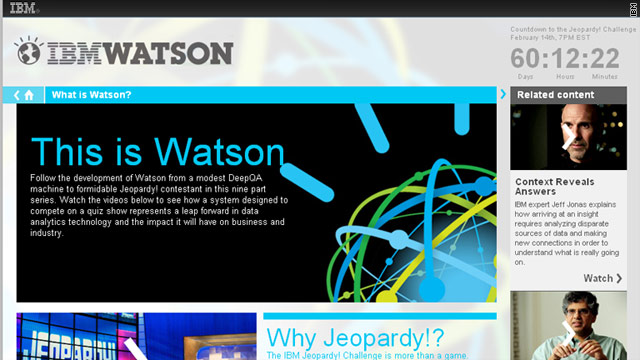 (CNN) -- Call it the digital age's John Henry showdown. But this time, it's "Jeopardy!," not a train tunnel, and an IBM computer instead of a steam shovel.

The iconic game show announced Tuesday that it will pit Ken Jennings and Brad Rutter, its all-time most successful contestants, against "Watson," an IBM computing system, in a series of battles next year.

The showdown, to be aired February 14-16, will feature two matches to see if a machine can compete in a contest that will require it to interpret real-language questions (or, in "Jeopardy!" parlance, answers), research them and answer quicker than the flesh-and-blood champs.

"After four years, our scientific team believes that Watson is ready for this challenge based on its ability to rapidly comprehend what the 'Jeopardy!' clue is asking, analyze the information it has access to, come up with precise answers, and develop an accurate confidence in its response," David Ferrucci, the scientist leading the IBM Research team that has created Watson, said in a written release.

"Beyond our excitement for the match itself, our team is very motivated by the possibilities that Watson's breakthrough computing capabilities hold for building a smarter planet and helping people in their business tasks and personal lives."

Watson's software is powered by an IBM Power7 server and, according to developers, is optimized to process complex questions and render answers quickly.

It has already passed the test that "Jeopardy!" contestants are given to qualify for the show and, according to IBM, has been "sparring" with other former "Jeopardy!" players.

Jennings broke the game show's record by competing in 74 games in a row during the 2004-05 season, racking up $2.5 million in winnings. Rutter has won the most money of any "Jeopardy!" contestant -- more than $3.2 million -- after his 2002 run and later appearances on "tournament of champions"-style shows.

The top prize for the Watson showdown is $1 million, with $300,000 for second place and $200,000 for third. Jennings and Rutter plan to donate half their winnings to charity, and IBM will donate 100 percent.

"We're thrilled that Jeopardy! is considered a benchmark of ultimate knowledge," said Harry Friedman, the show's executive producer. "Performing well on Jeopardy! requires a combination of skills, and it will be fascinating to see whether a computer can compete against arguably the two best Jeopardy! players ever."

"Jeopardy" is the No. 1-rated quiz show in syndication, with more than 9 million daily viewers.

The matches are reminiscent of IBM's "Deep Blue," a chess-playing computer that, in 1996 and 1997, was pitted against world champion Gary Kasparov.

Kasparov beat the first version of Deep Blue in 1996, but was defeated by a revamped program in 1997 -- with Blue scoring two wins and three draws in a best-of-five contest.